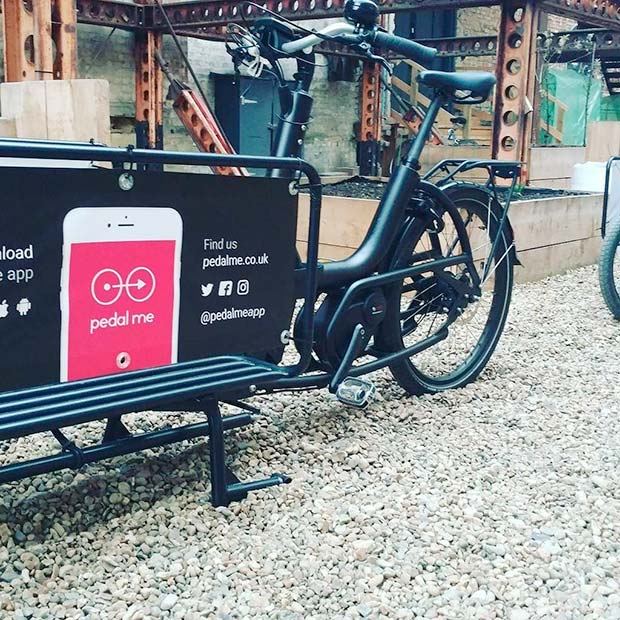 People are always looking for new ways of getting around the increasingly congested streets of London. Rickshaws are a common site and are increasingly becoming festooned with flags and other decorations, often indicating the nationality of the driver. Occasionally, they are blaring music from fairly tinny Bluetooth speakers – close your eyes and you are in downtown Marrakech! These are unregulated though and it makes sense to agree a price before you set off if you want to avoid a nasty surprise when you arrive at your destination! Well, now there’s a new kid on the block. Hot on the heels of amazingly successful App-based travel options like Uber and Addison Lee, comes Pedal Me.

Using bikes called ‘Urban Arrows’ which look a little like old-fashioned butcher’s bikes, they make the bold, but believable claim that they can get about town faster and more cheaply than traditional black cabs or Ubers. The bikes are elongated with a lowish carrying seat and they can carry up to 160 kilos – so around two adults. They have Bosch electric motors so it is not all down to pedal power but, of course, they have great green credentials too.

As they are narrow, they are able to weave through traffic and use lanes and cut-throughs that are prohibited to motor vehicles. The riders have to pass an off-road assessment of their capabilities and show good control including anticipating and avoiding potential trouble.

Co-founder of Pedal Me, Ben Knowles says that in road tests they can get from Waterloo Station to the City of London in rush hour in 10 minutes when a similar journey by black cab takes 19 minutes and costs much more.

Once again, the innovative skills of young Londoners never cease to amaze, and entrepreneurs Rob Sargent and Ben Knowles hope to expand the company’s fleet of bikes in the coming months. Equity in the business is offered as an incentive to riders and they are also looking for investing partners, so here’s your chance to jump into the tech revolution! www.pedalme.co.uk

Wish you were here?

The Victoria and Albert Museum seems to have struck gold again with “Their Mortal Remains”, the biographical exhibition of super group Pink Floyd.

Earlier in the year, this column reported on the new spectacle opening at the museum which once had a reputation for being a little fusty and old-fashioned but now seems to have found its place in the 21st century. Following hot on the heels of their fantastic David Bowie show last year, this new exhibition has extended its run with some 10,000 visitors every week!

Including personal items from surviving members of the group and a psychedelic lightshow, this exhibition will now run until mid-October and curator Victoria Broackes says: “That combination of authentic staging, amazing sound, rock ‘n’ roll spectacle and the V&A has really shone through the exhibition, and the popularity is not just with fans but with a diverse audience of all ages.”

A north-west London live music venue and pub that helped launch the careers of Adele, Kate Nash and XX is about to call last orders.

The Good Ship in Kilburn High Road will close at the end of October after its late-night licence was reviewed and reduced by the local council last year. Following closure of other music venues in the area, including the popular Luminaire and Power’s Bar, owner of the Good Ship John McCooke says: “It’s a mighty shame, particularly when west London is becoming a bit of a cultural desert. If this was a venue closing in east London, it’s bad news, but there’s hundreds of places and a thriving nightlife. That isn’t the case in west London.”

The review by Brent council followed concerns of events going on until 3am and security arrangements, but McCooke promises not to go quietly. “We want to go out with a huge bang and have everyone come down as often as possible while we are open.” Or so Rumour Has It …

There is an unlovely, industrialised area of East London rather glamorously called Silvertown. Interestingly, the name came from a certain Samuel Winkworth Silver who set up a Rubber Factory there in 1852. Presumably ‘Rubbertown’ was dismissed quite quickly when deciding on a name for the new district!

Anyway, this is all about to change with a huge £3.5 billion (€3.95 billion) investment through a partnership between social entrepreneur Nick Hartwright, Mayor of London Sadiq Khan and Silvertown Homes Limited.

The centrepiece of this will be the Silver Building which has been derelict for 20 years and is set to become a bustling artistic and entrepreneurial hub. There will be affordable working space for all kinds of companies and individuals from one-man bands to larger corporates with some 34 studios, communal areas and rooms for exhibitions, showcases and events.

On a wider scale, there will be a piazza of the same size as Covent Garden, a redeveloped one-mile long waterfront, pavilion-type buildings to attract the world’s biggest companies and some 3,000 new homes. There will also be a new bridge across Royal Victoria Dock to connect the area to the new Crossrail station at Custom House.

The overall plan is to replicate the thriving new life seen in the Meatpacking district of New York which arose from similarly industrial beginnings. A very silver lining for Silvertown!

London’s ‘Festival of Light’ was so popular last year that some displays had to be switched off amid safety fears when so many people came out to see them on cold, dark January nights! Lumiere London attracted some 1.3 million visitors with mainly west end venues like Piccadilly and Trafalgar Square taking part.

In addition, this year there are plans for winter displays at Waterloo and the National Theatre on the Southbank for the first time as well as Covent Garden and Victoria.