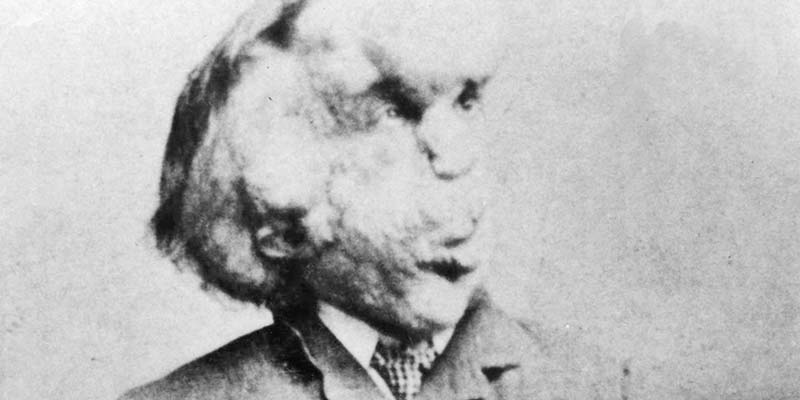 Only human
Perhaps the most famous patient ever at the London Hospital in Whitechapel, East London, was Joseph Merrick – better known as the Elephant Man. When he was five, Merrick began to develop a genetic condition, thought to be Proteus syndrome. This caused skeletal and soft tissue deformity and massive distortion of his body and appearance.

Now, 130 years after he died, the London location of his burial has been discovered, just down the road in the City of London Cemetery.

Born in Leicester, he had a miserable later childhood and adolescence and became an attraction in a macabre freak show of the time. His story was, of course, made famous in the film Elephant Man, which starred John Hurt and came out in 1980.

A London-based doctor saved him from the humiliation of the show and found him a room at the Royal London Hospital. By this time, his head measured 36 inches (91cm), his wrist was 12 inches (30cm) and his fingers were 5 inches (13cm) in circumference.

He died, aged just 27, in 1890 and by then had impressed everyone at the hospital with his intelligent and sensitive personality. He had become something of a celebrity for more of the right reasons and was even visited by the then Princess of Wales, Alexandra, who also sent him Christmas cards each year (there must be something about that position within the Royal family!).

Merrick’s skeleton has been preserved at the Hospital since his death for medical research but the whereabouts of his soft tissue has remained a mystery. Until that is, author Jo Vigor-Mungovin got on the case. In research for her biography about John Merrick, she became curious as to what had happened. “I was asked about this and off-hand I said it probably went to the same place as the Ripper victims as they died in the same locality,” she said. Two such victims are buried at the City of London Cemetery near Epping Forest, so she started looking through the fastidious records there.

Initially, she thought that maybe he was buried in the communal memorial garden, but Mrs Vigor-Mungovin believes she has now found the specific plot. The burial is dated April 24, 1890 and Merrick died on April 11. It details a 28-year-old man from the London Hospital when Merrick was actually 27, though mistakes with his date of birth were common and the author is 99% convinced this is the grave of the Elephant Man. Amazing detective work and look out for the fascinating book!

Meat the neighbours
Four areas of East London are looking at the possibility of having the most famous meat market in London on their doorstep. Following in the footsteps of Billingsgate fish market, Spitalfields fruit and vegetable market and Covent Garden flower market, Smithfield is moving out of the City.

There has been a meat market in the current location for some 800 years, making Smithfield one of the oldest markets in the capital. The Grade II building in Farringdon is a masterpiece of Victorian architecture and was designed by Sir Horace Jones, but the location is impractical for trade and hygiene with poor, congested road access.

Whilst most traders welcome the move, many will miss the old place. John Shiels, who works at Thompsons of Smithfield, said: “We’ve been here a long time, but they don’t want a smelly meat market in the middle of London. It will be good for hygiene, it will just be one big fridge. This is outgrowing itself. It could be a 24-hour market. But the only thing is you’re going to miss the history.”

Silvertown in Newham, Fairlop in Redbridge, Thames Enterprise Park in Thurrock are in the running for the new home of London’s premier meat market, but favourite is the site of former Barking Power Station. The existing building will be freed up for housing and retail development.

Take a seat
Travelling on the tube is a great way to get around in London but there is always that thing about offering your seat to someone in greater need. In days gone by, it would be considered polite for a man to offer his seat to a woman – of any age – but not so now. Some people seem to be positively offended when you offer your seat and this leads to a breakdown in common courtesy.

Fernando Sofis is the Design and Innovation Lead at Transport for London and he became acutely aware of the problem when on the tube in 2015. Having recently undergone an operation, he needed to sit down but, of course, this was not obvious to other passengers, one of whom asked to have his seat. He asked another passenger to give up their seat and an awkward scene followed!

Sofis has come up with something of a solution. There are now differently coloured ‘priority seats’ with brighter upholstery and slogans woven into them such as ‘Be prepared to offer this seat’ and ‘Not all disabilities are visible’.

These seats have been trialled successfully on the Jubilee Line and will shortly be introduced on the Central Line. And now Sofis is turning his attention to improving wheelchair access with an aim to reach a state of ‘turn up and go’ for wheelchair users so they can simply use the tube system in exactly the same way as other users rather than having to plan ahead. A man on a mission, for sure!

The writing on the wall
The British Library has opened a fascinating exhibition tracing the history of writing in every form from ancient words to modern-day tattoos. In a very rare outing, the oldest object in the British Museum, a 3,600-year-old Egyptian limestone tablet with hieroglyphics, will star alongside a wax tablet from around 100 AD, inscribed with a child’s homework, and Florence Nightingale’s diary.

The tablet contains 17 lines from a hymn to the Egyptian god of the Netherworld which belonged to the pioneering photographer William Henry Fox Talbot. Also on display is William Caxton’s first printing of the Canterbury Tales from 1476 and a quill that belonged to Alfred, Lord Tennyson.

‘Writing: Making Your Mark’ runs at the British Library until August 27 and as Lead Curator, Adrian Edwards said: “In the first 5,000 years since speech was first turned into symbol, written communication has stimulated innovations as varied as the printing press and smartphones. [The show] asks what the future holds for writing and how we will choose to make our mark in the decades to come.”

By Richard Lamberth
Richard leads parallel lives with homes and business interests in London and Portugal. He provides consultancy services to leading businesses in insurance and financial services, property and media sectors. He has four sons, two dogs and enjoys a busy family life. He likes swimming, keeping fit and an outdoor life.