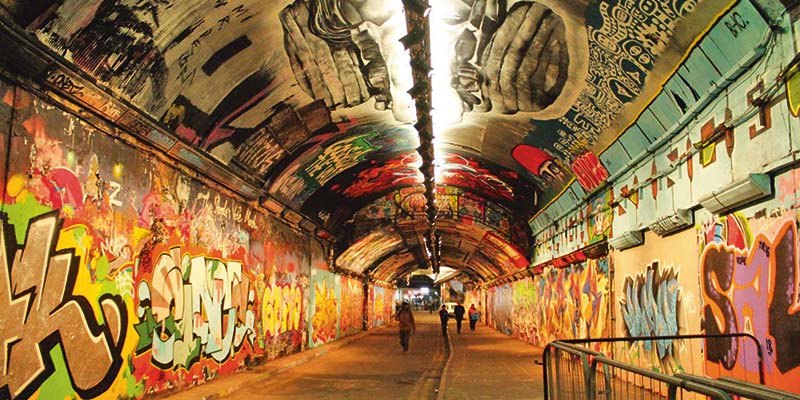 Faulty Towers
“Fantastic Feats: The Building of London” is a multi-media event taking place in the capital this summer with some 50 events over six months dipping into the worlds of theatre, music and art.

A French artist, Olivier Grossetête (yes, apparently that really is his name!), has been given a special commission to take over Guildhall Yard in the City of London this July to create one of his famous – and very temporary – works of art.

He builds huge edifices from cardboard boxes with the help of hundreds of volunteers and lots of parcel tape. In the south of France, he has built mock-medieval towers on historic quayside settings – and then, as the climax of the exhibition, he destroys them, of course, usually by bringing them tumbling down like those great chimney stacks of old power stations.

Other installations will include “Volo: dreams of flight” by engineer and designer Brendan Walker. With this extraordinary experience, you can swing, suspended from trees, wearing virtual reality headsets, which will make you feel like you are in one of the amazing prototype flying machines designed by Leonardo da Vinci.

Brendan Walker helped to design attractions at Alton Towers and Disneyland, so this is not one to miss. He said: “When you lift your feet off the ground, a whole world opens up to you and, depending on how high you swing, it will propel you through this world in different ways. If you really let yourself go, it will really feel like you are flying.”

Herman Melville’s novel “Moby-Dick” will be brought to life, also in the hallowed Guildhall Yard, by acrobats, dancers and musicians who will take apart a ship and transform it into a whale. There are various other venues, too, including Tower Bridge, which will host a peep show exhibition of alternative designs for the bridge that were submitted back in the 19th century.

All in all, probably not one to go to after one of those heavy lunches in the City!

Health and safety
It strikes again! This time, many of the pleasure boats operating on the Thames are sitting in the cross-hairs. Chris Grayling, UK Transport Secretary (AKA ‘Failing Grayling’!), and his department want to upgrade safety regulations for older passenger vessels. This will include a plan to ban seating at, or below, the waterline following consultation with the Maritime and Coastguard Agency.

There are huge numbers of boats offering pleasure cruises on the famous river that snakes through the capital. Around 25 of these are designated as ‘heritage vessels’ and many took part in the evacuation of allied troops from the beaches of Dunkirk, northern France, in 1940.

But these credentials matter not to Mr Grayling’s department who want to enforce the new regulations which could cost around £250,000 (€290,000) per vessel to introduce, also reducing each vessel’s passenger capacity by 50% at the same time.

Every year around 50,000 people safely enjoy trips on the boats between piers at Westminster, Kew, Richmond and Hampton Court and accidents have been very few. The last serious one occurred with the sinking of the “Marchioness” some 30 years ago.

Boat owners are up in arms claiming that this will kill off their business. Lorraine Maynard, who operates the “Cockney Sparrow”, said: “I have put my heart and soul into this for 25 years. It would be very sad to see the upriver route go. People don’t always want to go on a fast service like the Thames Clipper. They want something with character and commentary.”

Danny Collins, who operates the Dunkirk veteran vessel “Princess Freda”, added: “This would put us out of business and our boats would have to be scrapped.”

London Mayor Sadiq has said he hopes to offer financial assistance to boat owners and London MPs, like Sir Vince Cable, leader of the Lib Dems, who represent affected areas, are offering support, saying they think that the Transport Department’s heavy-handed tactics are “disproportionate”.

Here’s an idea for Mr Grayling from your columnist – how about banding these boats together as a potential fleet to use in the event of a No-Deal Brexit? At least these guys have some boats!

The Fleet Street Job
The infamous Hatton Garden Robbery four years ago seems to have provided the blueprint for a new raid on a jewellery shop in the street made famous by its past links with the world of newsprint.

At the end of March, the annual London Landmarks Half Marathon took place on the city streets and the huge crowds that cheered on the 13,000 runners masked the noise of drilling machines as they burrowed through the wall of an adjoining building into a famous jeweller.

Jewellery and watches valued at some £3 million (€3.47 million) were stolen from display cases at the premises of George Attenborough and Son based in a building actually owned by BBC TV’s “Apprentice” host, Lord Alan Sugar.

A major police hunt coordinated by the Metropolitan Police’s elite Flying Squad is underway but to date there have been no arrests.

More to Waterloo!
The graffiti tunnel near Waterloo station looks like a view of dystopian London life in 2019 that we may have imagined after watching Stanley Kubrick’s “A Clockwork Orange”. The road tunnel running under all the lines of the capital’s busiest train station is brightly lit and very colourful with some truly astonishing graffiti art.

The curved tunnel is completely painted with amazing perspective and accuracy. It is actually bewildering to imagine how the painting on the ceiling was actually done!

The artists themselves seem to relish their slightly sanctified, clandestine activities and are reluctant to talk or be photographed. When your columnist asked for a photo of one particularly talented guy, he had to wait while the artist pulled his hood up and scarf over his face – and even then turned away as the picture was taken!

Certainly, this is worth a visit and right next-door is the fantastic, now open, official Mandela Exhibition on the start of its world tour. This is a fully interactive display of the life and times of one of the greatest statesmen of the last century.

It includes much of his favourite, and most flamboyant, clothing as well as a carefully documented walk through the great man’s life. It feels very personal and leaves you with a feeling of just how incredible this man was, retaining both his principles and integrity in the face of adversity.

The exhibition runs until June when it is planned to move on to Paris, but there is talk of an extension to the London leg due to its popularity. Do not miss this one.