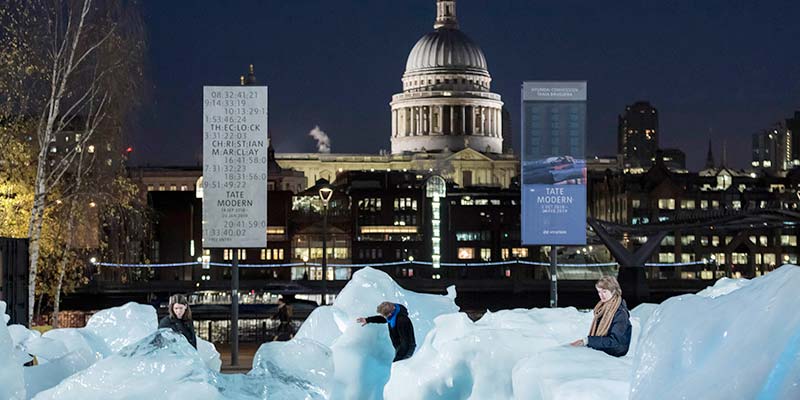 Going, going, gone
This could have been the title of a recent art exhibition in London but, actually, Norwegian artist Olafur Eliasson called his poignant display ‘Ice Watch’. The Tate Modern on London’s South Bank has had some very unusual exhibitions over the years, including one in 2003 when they flooded the huge Turbine Hall of this former power station with fake sunlight. This time there was a possibility of real flooding when 24 huge chunks of ice from the Nuup Kangerlua fjord in Greenland were placed outside the building.

The winter has been very mild in London this year so far and this helped to make the artist’s point about climate change and global warming as the huge blocks of ice started to melt quite quickly.

The project was launched to coincide with the climate change conference in Katowice, Poland, and Eliasson commented: “The way I see it is looking at the ice we are suddenly confronted with something that in the news or in climate papers comes across as being very abstract. You don’t get a physical relationship from reading about something.”

The blocks were breaking off the ice sheet in the fjord and were retrieved by a team of divers and then transported by boat and trucks which usually carry frozen fish to the UK. A further six blocks were placed outside the London office of Bloomberg, whose boss, former New York mayor Michael Bloomberg, has supported the project financially. New York, of course, is one of the major world cities that could potentially be devastated by rising ocean levels.

Visitors were encouraged to touch the ice, which continually emitted popping sounds as air bubbles trapped some 50-100,000 years ago were released, as Eliasson added: “You can go up to it and you can listen to it and you can smell it. When you put your ear on it, it goes cold and wet, but you can actually hear it cracking. It actually sings – it is giving the ice a voice, I almost say, and you can quite literally hear it.” Apparently, 10,000 blocks this size melt every second in Greenland – maybe your columnist’s title is more poignant!

Mud, glorious mud!
In 18th and 19th century London, ‘Mudlarks’ were a common site scavenging through the mud at low tide on the River Thames and scraping a living from what they found. In those days, the river was filthy and little more than a sewer for the growing capital, so it was not a pleasant occupation! Now the river is much cleaner and still some people hang on to the title Mudlark as they wander with a keen eye and sometimes a metal detector looking for treasure. The Thames is tidal as far as Teddington Lock in West London so there is plenty to be explored.

Alan Suttie, an artist from London, was on a course at St Paul’s Cathedral when he decided to take a walk down to the Thames one lunchtime. He was walking along the shoreline when a wave washed something right in front of him and, as he continues the story, “I was down there just in my break from a meeting in the City with my suit and my best shoes on. But us mudlarks can’t help it. If we get a chance to nip down to the river, we’ve got to get on it.”

What Alan had seen washed up in front of him was a Roman oil lamp, dating from 4-500AD. It had been made in North Africa and dates from the end of Roman rule in Britain. He was initially told the lamp was a Victorian copy, but then he took it to the Museum of London who have now designated the find as ‘an item of national importance’! Astonishingly, the lamp is in near-perfect condition and will now be displayed at the Museum along with recent finds from other mudlarks!

Checkmate
London has a rising new star in the world of chess. Shreyas Royal, nine, from South London has been hailed as a “talent for sure” after playing against the American grand-master Fabiano Caruana who himself narrowly missed becoming world champion.

This all took place at the London Chess Classic at Olympia, which not only pitches the world’s best players against each other, it also includes masterclasses for talented children.

Talking about his game with Caruana, Shreyas said: “It was very exciting. It’s a real experience playing here.” Famously, his chess skills have already benefited his family when Home Secretary Sajid Javid allowed them to stay in the country after his father’s work visa expired, stating the reason being that Shreyas is “one of the most gifted chess players in his generation”.

London welcomes 2019!
Brexit looms, world security seems more precarious than ever and our climate is changing but still we welcome in each new year with optimism and fireworks – it’s called being human – and, of course, nowhere does this better than the UK’s capital city.

The London New Year’s Day Parade is a relative newcomer to the celebrations as the calendar clicks over. The parade first took place in 1987 and snakes its way through the streets of central west London. It was initially called the Lord Mayor of Westminster’s Big Parade but changed its name in 1994 and for one year only in 2000 was called the Millennium Parade.

Around a million spectators line the route and there are marching bands, floats and giant inflatable blimps alongside bicycles, buses and anything else that vaguely connects to London and of course things that don’t – once again this year there were a large number of marching bands from high schools in the United States. In fact, the inspiration is the great street parades of New York, but the London event is now generally accepted as being the biggest New Year’s Day street event of its kind.

Money is raised for London charities and each of the 32 London boroughs are encouraged to participate. There is a competition for the best entry and last year it was won by the City of Westminster who had a Mary Poppins theme – which may have been a better one for this year with the release of the film Mary Poppins Returns!