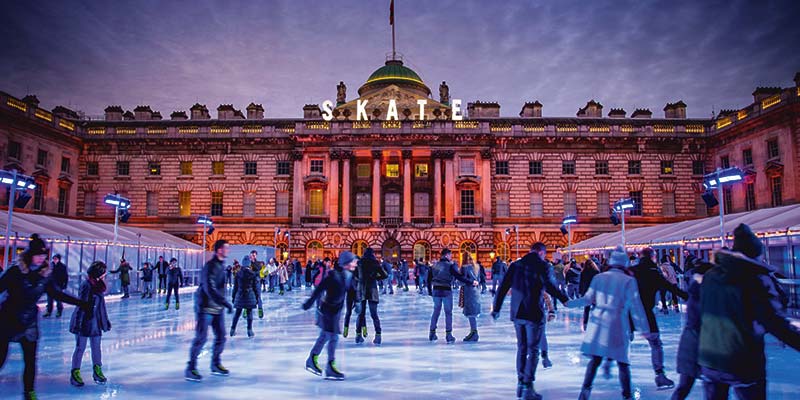 Talk to the animals
London Zoo is the world’s oldest scientific zoo, having opened on April 27, 1828. It was intended purely as a centre for scientific study of animals but, realising they had a great potential source of funding available, the zoo opened to the public some 20 years later. Animals were transferred from the former Royal Menagerie at the Tower of London and the zoo quickly became very popular as a place to glimpse wild animals that ordinary Londoners would have little chance of seeing otherwise.

The Zoological Society of London, which owns the zoo, receives no state funding and relies totally on the income from visitors and members. Consequently, they are always looking at new ways to raise money and are this year opening the zoo in the evening from the end of November for a celebration of ‘Christmas at London Zoo’.

Pointing out that the animals will be ‘tucked up in bed and asleep’, visitors will instead be able to walk through a ‘magical after-dark experience’ where they can follow illuminated pathways and see brightly-lit wild animal sculptures rise into the night sky. There will also be a light vortex and tunnels to explore with some 100,000 lights all around – and of course, Father Christmas will be there along with a vintage carousel and lashings of hot chocolate on tap!

Meanwhile, the Zoo has been celebrating the progress of their new baby penguin, ‘Rainbow’. This beautiful creature had an inauspicious introduction to the world when her parents stepped on her egg and she was born prematurely! She then spent 10 weeks in an incubator before moving to the ‘penguin nursery’ and then eventually the main pool. She is called Rainbow because she was born at the time of the London Pride celebrations and wears an easy-to-spot, multi-coloured armband.

Adrian Walls, London Zoo’s head bird keeper, said: “Rainbow has gone from strength to strength. She loves food and is always eager for her next meal, especially when it’s sand eel – a fish we feed our colony as a treat.”

‘Be careful to trust the person who does not like wine’
This is one of the lesser-known quotes of perhaps the most famous revolutionary ever, Karl Marx. Marx lived in London most of his life, died there and is buried in Highgate Cemetery, north London. He arrived in 1849 and all over the city there are sites where Marx lived, socialised and wrote. He was something of a nomad and lived in various locations. There is a blue plaque on the famous Soho restaurant Quo Vadis and you can even rent the ‘Marx Room’ (where he lived, above the restaurant) for private functions!

Just down the road in Great Windmill Street in what was the Red Lion, now Be at One, was the place chosen by Marx and fellow revolutionary Frederich Engels to write The Communist Manifesto in an upstairs room. And in the British Museum Reading Room, you can sit in seat G7, Marx’s favourite spot, where he wrote his most famous work, Das Kapital.

There are several houses in north London where Marx then lived with his family and the tomb itself in Highgate cemetery is a Grade 1 listed monument and certainly worth a visit. He was originally buried in a normal plot but, along with his wife, was disinterred in 1954 and reburied in a more prominent corner position reflecting his historical status and the sheer numbers of people visiting.

Highgate Cemetery is worth a visit in any event and is actually a peaceful place of solitude and reflection. There are many other famous people buried there including novelist George Eliot, rock impresario Malcolm McLaren, actor Corin Redgrave and even Bruce Reynolds, mastermind of the infamous Great Train Robbery! Well worth the £4 (€4.50) entry fee.

Don’t stop me now
Following hot on the heels of the monster-success Queen biopic “Bohemian Rhapsody”, London has a very special treat in store for Queen fans this Christmas.

Carnaby Street in the West End is famous for its fashion shops and boutiques. It first came to prominence as the heart of the Swinging Sixties in London and was a well-known hang-out for bands like the Rolling Stones, the Who and the Small Faces. Well, now Queen are set to take centre stage in the run up to the festive season.

The street will feature a dazzling display of neon lights with the words of “Bohemian Rhapsody” glowing above the heads of shoppers. There will also be a pop-up shop with costumes, photographs and films of the band’s heyday in the 70s and 80s. The display and shop are there until January 6, so get there if you can.

Jingle all the way
London is spoilt for choice at Christmas time with seemingly unending markets, light displays, funfairs, experiences and shops, which really capture the spirit of the season. A firm favourite though is Somerset House, overlooking the Thames and just off Waterloo Bridge.

This fine Georgian building was built on the site of a former Tudor Palace and the neo-classical style with a huge central courtyard almost seems designed especially for Christmas. Until quite recently, this beautiful place was in part used for some rather tedious purposes by the Inland Revenue and the public records office. Year round though, it also houses perhaps the best collection of impressionist paintings in London, the Courtauld Gallery, and has other fantastic touring exhibitions.

Christmas has been seized upon as the time the place really comes alive. It was one of the first venues in the capital to have a seasonal ice rink and this is now so popular that booking is essential. The famous London shop, Fortnum & Mason, has once again this year taken most of the West Wing for an arcade which they claim will be ‘filled with the finest of Fortnum’s food, tea, gifts and decorations’. It will also be slightly less frenetic than their store in Piccadilly, which can get swamped at Christmas time with visitors desperate to see their famous window displays!

Additionally, there are various wonderful cafés and bars to eat, drink and be merry with family and friends overlooking the courtyard and the river. So, if you are in London this Christmas, don’t miss it!

By RICHARD LAMBERTH
Richard leads parallel lives with homes and business interests in London and Portugal. He provides consultancy services to leading businesses in insurance and financial services, property and media sectors. He has four sons, two dogs and enjoys a busy family life. He likes swimming, keeping fit and an outdoor life.