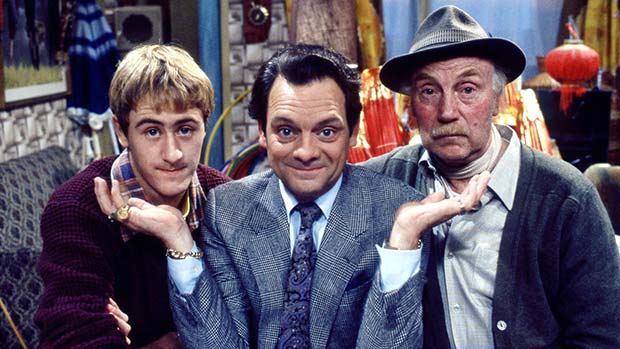 Lovely jubbly!
It seems that there is almost nothing that cannot be turned into a West End musical. “The Book of Mormon” seems like an unlikely subject for a smash hit but has won numerous Tonys and Oliviers and is almost into its eighth year in London.

Hoping to follow this success are the producers of a new production which hits the stage next year – “Only Fools And Horses The Musical”! The comedian Paul Whitehouse will play Grandad and has been working to produce the show with Jim Sullivan, son of the writer of perhaps the most iconic BBC comedy series ever, John Sullivan.

The new show will feature over 20 songs, some of which were written by Chas Hodges, the one half of “Chas and Dave” fame who sadly died in September, aged 74. John Sullivan had originally thought of a stage show and had been working on it when he died in 2011. He had already enlisted the help of Hodges, so it was a natural call for Paul Whitehouse. He said: “I went to Chas and we did a couple of arrangements. We had a love of Spurs and grew up in the same area, and used to go fishing in the same places. When we met it was like we were almost old friends. It’s a homage to Chas too.”

“PhoneShop” comedian Tom Bennett will be playing Sir David Jason’s, hard-to-follow portrayal of Del Boy, and relative newcomer Ryan Hutton will be playing his long-suffering younger brother Rodney. The musical is set in 1989 but Whitehouse claims it is much more than simply an episode of nostalgia. Opening at The Theatre Royal, Haymarket on February 9, this has got to be worth a trip. You know it makes sense! Visit onlyfoolsmusical.com for tickets.

Lest we forget
There was a call at the end of both World Wars not to forget those who gave their lives fighting for this country, and London, in truth, has never done so.

This year, in advance of the annual remembrance events each November, those iconic poppies which first appeared in the moat around the Tower of London in 2014 have returned to the capital. They have been touring the country in the meantime and more have been produced with the public being able to purchase the originals.

The tour is now over and the Weeping Window installation by artist Paul Cummins and designer Tom Piper can be seen on the front of the Imperial War Museum in south London until December.

There was an interesting angle on the First World War in Covent Garden as well last month. Some 900 London buses were requisitioned during the war, painted in camouflaged colours and used to transport troops to the front line. They were driven by their original drivers and were B-type buses, the first, reliable, mass-produced motorised vehicles to replace horse-drawn carriages on London’s streets. They were also used to transport wounded soldiers and even as mobile lofts for carrier pigeons!

There are a few of these vehicles left but probably the largest gathering ever was staged in Covent Garden at the end of September. On loan from private collectors, the Imperial War Museum and the London Transport Museum, these incredible vehicles brought a forgotten part of the war to life.

London and Portugal
The UK capital has many links with Portugal, particularly south of the Thames. Stockwell in South London has an area known as ‘Little Portugal’ where some 27,000 Portuguese live, many of whom came over in the 1960s and 1970s. When Benfica or Sporting Lisbon are playing, the crowds spill out onto the pavements from the many cafés in the area selling pastéis de nata and other Portuguese delicacies. There are also street markets and some great restaurants in the area. Slightly further afield, in Covent Garden, is a wonderful purveyor of all the great Lusitanian food and wine – Canela in Earlham Street is worth a visit for anyone missing the taste of Portugal.

Pestana Hotels, the largest Portuguese tourism and leisure group, has a great luxury hotel located again south of the Thames, just off Chelsea Bridge. Overlooking Battersea Park and within easy reach of the West End, this is a great base to explore the capital with a Portuguese twist! No surprise, therefore, that this has been chosen once again for the increasingly popular ‘Moving to Portugal’ event, staged by the Portuguese Chamber of Commerce in London on October 31, 2018. These events have been held for the last three years and once again several hundred attendees are expected. Expert speakers on tax benefits, foreign currency exchange and the real estate market will be there and in an increasingly uncertain world, this is the place to get some no-strings-attached help and guidance on taking the plunge!

Flamingos return
Algarve residents may be familiar with flamingos in their river estuaries but not so residents of London. There are exotic birds that seem to do well in the UK capital – the green parakeets screech around parks and gardens, particularly in south west London, the ravens hang on in there at the Tower of London and there are pelicans in St James’s Park, but the flamingos went when Kensington Roof Gardens were closed by owners Virgin earlier this year.

This Grade II listed, 1.5 acre (0.6 hectare) site on top of former Derry and Toms department store has been a famous party venue for many years. There are more than 70 mature trees, including fully grown oaks and fruit trees, and a flowing stream. Gardens were divided into three distinct areas, the Tudor Courtyard, the Spanish Garden and the English Woodland. There were fish, ducks and yes, flamingos until all were transferred to a wildlife sanctuary when the venue closed in January.

The owners are currently shortlisting new potential operators of the gardens and are looking at plans which will include a world-class restaurant when the venue re-opens in 2020.

Always a magnet for celebrity parties, the gardens have been popular in the past with the Duchess of Cambridge, Madonna, Kate Moss and rock band Queen.