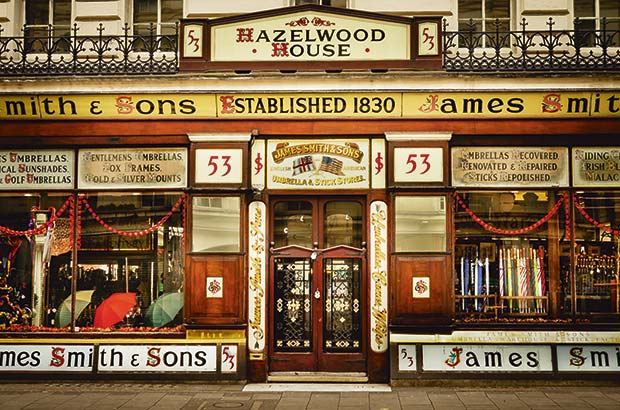 Singing in the rain

London’s famous theatreland bumps into the shopping delights of the West End where Shaftesbury Avenue meets Oxford Street and near this corner is one of the most intriguing shops in the capital.

Now, you have to remember that it rains a lot in London and so, in 1830, an enterprising man named James Smith opened an umbrella shop in Regent Street. The business expanded rapidly and his son moved the main shop to New Oxford Street in 1857.

This umbrella emporium remains in place today and has changed very little since that time. It truly is a wonder to behold – the original shop front is still there and when you walk through the door, you step back in time to a more genteel age when serious consideration was given to purchasing a device to keep you dry. There is good old-fashioned personal service on offer too, with very knowledgeable staff only too happy to give you whatever advice you may need.

But it’s not all umbrellas. No, there are walking sticks, too, and if you want one with a beautifully carved bust of Winston Churchill or Sherlock Holmes on the end, that’s just fine, they have them. For a moment you feel as though you are in a museum and then you notice the price tags. There are umbrellas on sale for as much as £395 (€455) and sticks run into the thousands for the more intricate designs. When your columnist visited, there was seemingly no shortage of mostly Chinese tourists happy to buy them!

James Smith and Sons have been keeping Londoners dry for nearly 200 years and this beautiful shop seems to have simply ignored the incredible pace of change going on all around!

Astonishingly, there are over 500 skyscrapers either being built or planned across the whole of London right now! The Square Mile of the City is increasingly full of weird and wonderful shaped buildings, each one climbing that bit further into the sky. Recently, your columnist (who claims to know a thing or two about London) was asked for directions in the City and turned to point to a view and direction that is simply no longer there as the mighty ‘Walkie Talkie’ was in the way!

The buildings produce a marked ‘canyon’ effect as they block the winds at high altitude and bring them swooping down to earth.

And now the skyscraper footprint is extending across London with all but seven boroughs having plans to build them. Although the market for high-end, luxury property has slowed somewhat with Brexit uncertainty and rising building costs, there has been a surge in demand for middle-value properties, prompting boroughs like Bromley and Walltham Forest to reach for the skies for the first time.

Peter Murray, chairman and coordinator of New London Architecture, said: “There has definitely been a shift from luxury to more middle-cost housing. Towers are not the only way of delivering the density of housing that London needs but, in certain areas such as Transport for London sites near stations, there are virtually no alternatives.”

Crossrail, now officially ‘The Elizabeth Line’, fully opens next year and this, too, is anticipated to spread the proliferation of tower blocks. And at least the dreadful Grenfell Tower disaster last year has meant additional care and attention is being given to fire prevention and containment in these big beasts.

Meanwhile, at Tate Britain, on Chelsea Embankment, a fascinating exhibition of impressionist paintings can be seen until mid May – and again there is an architectural twist. In the 1870s, the Franco Prussian war was raging, Paris was in revolt and many artists fled France for London to escape conscription and chaos. These included Monet, Tissot and Pissarro, all of whom have works included in this exhibition. Monet is, of course, best known for his paintings of water lilies, but he had a fascination with architecture and painted some of his most incredible works here, including his famous “Houses of Parliament”. The exhibition also includes works by Dalou, Sisley, Derain and Legros and is certainly worth a look if you can get there.

Three of London’s boroughs feature in the top five best places to live in the UK, according to a survey by business consultants Grant Thornton. Camden, Westminster and Richmond were the top scorers with analysis factors including prosperity, health and overall ‘happiness’. Another eight boroughs featured in the 10 most prosperous boroughs, but places like Hackney and Newham were flagged for the worst inequality between wealth and deprivation.

Westminster came top of a list showing which boroughs contribute most to the country’s GDP with an astonishing £54 million (€62 million).

After what has seemed like a very long winter in the UK capital, mid April saw summer arrive in a day! It almost seemed like spring had been overlooked when mid-month temperatures soared into the mid-to-late 20s. The parks filled with office workers at lunchtime and, after work, as temperatures beat those in Malibu, Athens and Istanbul. In another new descriptive word brought into play by the Met Office, a ‘plume’ of hot air from Africa descended on London and brought those winter white faces and knees out in the park!

Once again, anticipation is in the air in South West London as the world’s greatest tennis championship approaches. This year though, there is additional excitement – for a few lucky people.

The All England Lawn Tennis Club is looking to expand and is in talks with the neighbouring Wimbledon Park Golf Club having made an offer of £50 million (€57 million) for their land. This could mean that around 450 members could be in line for windfall payouts of up to £100,000 (€115,000). Members include TV stars like Piers Morgan and Ant and Dec, and not all members will receive a payout if the deal goes ahead as they will need to have been a member for more than 10 years.

The Tennis Club already owns the freehold of the land and will get its hands on the course in 2041 anyway, so there is a lot riding on the decision – a majority vote of 75% of members is required and unrest is apparently in the air!