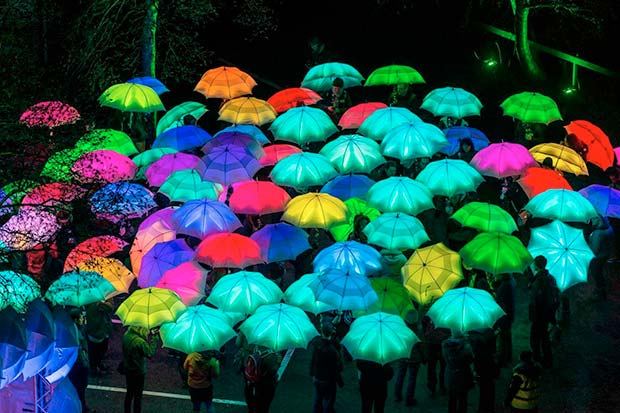 It has been a funny old month for pole-dancing in London! Peter Stringfellow, owner of the ubiquitous club in his name near Covent Garden and various other establishments, announced he may be withdrawing his support for the Conservative Party. Alarmed at the direction taken by the party and government over Brexit, he said: “I’m quitting the Tories unless they change direction and lead us towards Remain.”

Meanwhile, over in a gentlemen’s club housed in a warehouse in East Ham, they have come up with an idea which may solve any worries Mr Stringfellow has of recruiting eastern European beauties for his clubs. Brixton-based artist Giles Walker has designed a troupe of robotic pole dancers to gyrate on the stage of the Sapphire Club!

Comprising heads made of old CCTV cameras, mannequin pieces, scrap metal and even windscreen wiper parts, they are eerily realistic and are programmed with different sequences to keep people entertained. Walker said of his dystopian creation: “I wanted to do something about voyeurism and questions of power, how everyone is being watched.” Big Sister is watching!

Craven Cottage, home to Fulham FC, would probably not be described as very beautiful to anyone but a die-hard fan. It sits right up against the Thames, overlooking the stretch of river where the famous annual boat race between Oxford and Cambridge Universities takes place, and has changed very little since the ground was opened in 1896. Lots of red brick topped with barbed wire abounds and there is no access to the riverside.

Now all of this is to change with some ambitious plans that will see the riverside stand end demolished and an encroachment into what is currently river of some 11 metres built. The good news for walkers is that it will mean the Thames Path can continue along the river rather than having an awkward diversion through residential streets which is currently the case.

Nine short-stay luxury apartments and new shops are included in the plans and the extension will be cantilevered beyond the line of the existing river wall. The capacity of the ground will increase by about 20% and as architects Lichfields said: “The ambition is to return [Fulham] to the Premier League as soon as possible. The stadium has to match this ambition.”

The plans are by no means universally popular and some nearby neighbours are up in arms. Local author Eivor Martinus said: “We are blessed with rich bird life thanks to the [Barnes) Wetland Centre and greenery on both sides. A colossus reaching well into the river would ruin this.” Another resident said the ‘cliff-like structure’ will block wind, threaten sailing and be a safety hazard. If they think it’s all over .. it’s clearly not!

Sotheby’s, the world-famous auction house based in Bond Street, West London, is best known for the fantastic prices achieved at sales when some of the most sought-after pieces of art in the world come up for sale. Lesser known, but equally important, is the charitable work and support given to organisations who would otherwise struggle to achieve recognition.

This month, Sotheby’s ran an important exhibition for the award-winning charity, Outside In. Since its founding over 10 years ago at Pallant House Gallery in Chichester, Outside In has worked to provide a platform for artists who find it difficult to access the art world due to health, disability, social circumstances or isolation. Providing opportunities for its artists to show their work at national and international exhibitions, an active online community and professional development, this growing charity now supports over 2,500 artists.

Commenting on the exhibition at Sotheby’s, Marc Steene, director of Outside In, said: “As Outside In looks to the future, our exhibition celebrates some of the 5,000 artists we have worked with over the past 11 years. It points to a new and exciting future, where the charity will be able to continue and expand its vital work, bringing to light and celebrating the talent of artists too often ignored and on the margins of society and the art world.” Take a look at the great work of this fantastic charity – www.outsidein.org.uk

Lumiere now features very prominently in the Capital’s entertainment calendar. From relatively humble beginnings, this January spectacle is now the UK’s largest light festival and has spread all over the city. Sadly, it only lasts for four nights but those few late January, winter nights are beautifully brightened by vivid, moving, colourful light displays that bring buildings and parks to life from about 4.30pm.

It has become so popular that most roads in the West End are closed completely to traffic (including cyclists), which in itself provides a welcome relief from the constant presence of vehicular menace. In fact, as pedestrians wander around Piccadilly Circus, oblivious as to whether they are on the road or pavement, the traffic lights themselves seems to be joining in the light effects as they pointlessly work through their sequences!

One of the most popular displays this year was ‘The Umbrella Project’ which is a pop-up, choreographed performance piece using LED multi-coloured umbrellas by Bristol-based Cirque Bijou, with London dance groups.

Most installations are in just one location though and the real fun is walking through the streets, coming across one amazing sight after another. ‘My Light is Your Light’ is a rather moving piece in St James’s Churchyard which pays tribute to the terrible conditions experienced by Syrian refugees as they escape their war-torn homeland. On a lighter note, perhaps the centre-piece is a large balloon-type structure at Oxford Circus which is quite stunning but nearly disappeared when January storms snapped some of the guy ropes!

Lumiere is reason enough to visit the UK capital at the end of January and, who knows, you may even get into some of the museums without queuing so long as well!

The independent Rio Cinema in Dalston, East London, seemed doomed when it became insolvent in 2013. But now the wonders of crowd-funding and great support from the local community has seen a second screen opened and audiences increase by some 25%. The fantastic Art Deco cinema opened in 1915 as the Kingsland Picture Palace and since 1994 has hosted the annual Turkish Film Festival. Executive Director Oliver Meek is bullish about the future: “The cinema had difficult times for the last decade. But we have made it a thriving place and it’s starting to pay off. I think the future is bright,” he said. Good news for a new year.