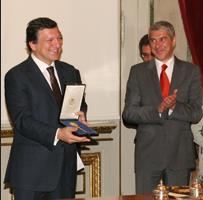 THE COMMISSIONER of the European Union, José Manuel Durão Barroso, has been awarded the Key to the Freedom of the City of Lisbon.

The golden key, awarded to those who have carried out some kind of lifelong service for Lisbon or for outstanding persons from the city, was handed to the EU Commissioner by Lisbon Câmara President, António Costa, for his work during Portugal’s Presidency of the European Union.

Speaking in the presence of the Prime Minister, José Sócrates, Durão Barroso, who was born and bred in Lisbon, said it seemed “strange to be getting the keys to the city where I come from”.

“It’s a bit like arriving at the front door of your own home after being away and then being handed your own front door key by someone else,” he joked, adding that studying the long list of famous people awarded the key, such as author José Saramago and Carlos Lopes, Olympic gold medal winner, the difference from them was that he really was from Lisbon.

António Costa said he wanted to underscore “Lisbon Câmara’s role in constructing the European Union, at the same time we honour you – the Lisboner, the Portuguese and the European.”

Durão Barroso said that Lisbon had had a singular presence in the construction of the European Union project. “Today when discussing policies and strategies in the rest of the world, the name Lisbon is always present through the Lisbon Strategy and now the ´Treaty of Lisbon,” he said.