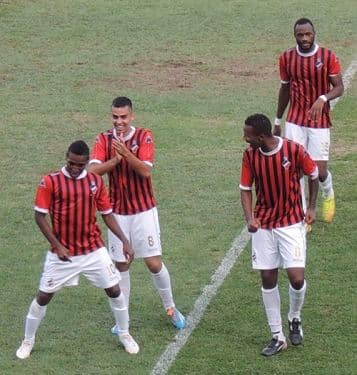 Following a two week break for internationals and cup games Olhanense are in upbeat mood as they travel to Setúbal on Sunday to play their nearest league opponents V.Setúbal. The two teams are old rivals and have met fifteen times previously in the top flight but it will be last season’s 3-2 victory at the Bonfim Stadium that will long be remembered. Olhanense were 2-0 down after just ten minutes through a penalty and an own goal, but two goals from Yontcha and a late winner from Ismaily (now with Braga) capped a memorable day. Manager Sérgio Conceição held a friendly, behind closed doors, against Louletano at the Algarve Stadium last week. New Benfica loan signing Djaniny scoring for Olhanense but a brace from Chiquinho put Louletano in front. A penalty from Rui Duarte restored equality before Nuno Silva scored the winner direct from a free-kick. A few days earlier Djaniny was on the score sheet in Cape Verde’s surprise 2-0 win over Cameroon in a 2013 Africa Cup of Nations qualifier.