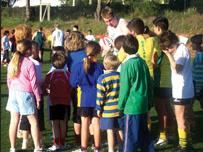 The team arrived in the Algarve on Sunday, December 17, for a week of recovery. Light training and fitness days at the beginning of the week were followed by more intensive sessions towards the end.

During their stay, children who enjoyed playing rugby were invited to the club in Vilamoura on Tuesday, December 19, for an hour-long training session with members of the team and the coaches.

“The day was a great success and the drinks reception after the training was well attended” said staff from Newlyn Portugal, who sponsored the children’s training day.

Loulé rugby school took 28 of their players to join the fun and the director of the school, Faustino Pires, said: “It is wonderful what the team did today. They took time away from their visit and did something very valuable for the kids.”

Vilamoura rugby school coach, Dimitri Cuharenco, who was also present at the training session with six of his pupils, said it was great to be involved.

This day was especially valuable for underprivileged children from the Belas Rugby Club in Lisbon, who travelled all the way by bus just to train with the Irish team.

They were thrilled by this opportunity and Keith Gleeson, who plays wing forward for the Irish team, told The Resident that he was thrilled with what they did: “Especially for the kids, who came from far away. They had fun and that is all that matters.”

Gleeson said he was having a really good time in the Algarve and said that the facilities at Browns were fantastic. He said the team was also enjoying the peace and privacy that the area offered.

When asked about morale in the camp, he said: “It’s definitely high. The guys are really looking forward to next year and confidence is high too.”

The team is currently in the top five in the world rankings above England, Scotland, Wales and Italy.

The Resident caught up with 19-year-old Luke Fitzgerald, who is a recent addition to the national side and one of the youngest players for more than 30 years to play for Ireland.

Luke said that “the Six Nations should be really exciting”. When asked how he thought the team would do  in the tournament, he laughed and said “you’ll have to wait and see.”

Do you have a view about this story? youropinion@portugalresident.com