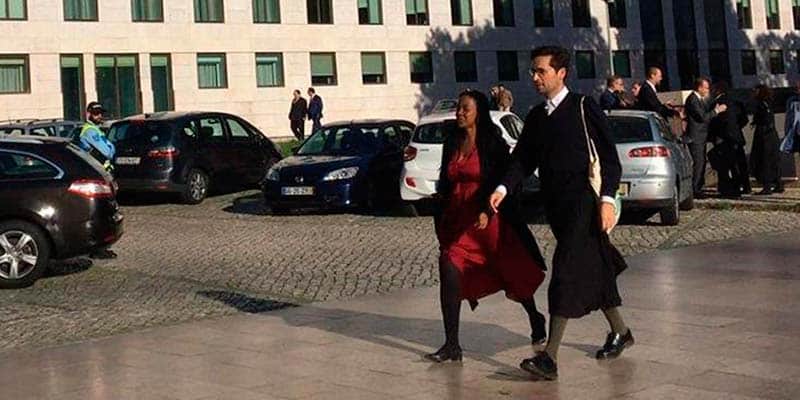 Livre, the minority party that won its first seat in parliament earlier this month, has consolidated on its victories by sending a man into parliament in a skirt.

The idea, for the advisor to Portugal’s first black woman MP Joacine Katar Moreira, was to ‘do away with parliament’s masculinity”.

It’s become a mantra of Ms Moreira, who herself turned up for her first day in parliament in a dramatic red dress, lips “painted the same colour”, and beautifully-plaited long locks.

The woman whose stutter is causing MPs to re-think the time allowed for colleagues’ habitual interventions, is determined to inject real femininity into parliament.

Thus her advisor, Oxford educated Rafael Esteves Pereira duly obliged, striding alongside her in a mid-calf length skirt and sensible brogues, with a discreet bag over his shoulder.

It was a confusing day all round, explain reports. So many parties suddenly rubbing shoulders with each other.

Indeed, in the case of right-wing Chega – which like Livre managed just one MP – some members found the whole prospect of rubbing shoulders just too much.

CDS-PP colleagues have said Chega’s ‘right-most spot in a row behind a wooden balustrade’ means they would have to get up for MP André Ventura, if he arrives late.

“It’s not a political question”, said one MP. “It’s a practical one”.

Ventura is not convinced. He told Expresso “this is them wanting to humiliate Chega once again”…

Parliamentary president Ferro Rodrigues is hoping to get round the issue by creating a ‘dedicated entrance to the benches’ for Ventura’s exclusive use.

What Ventura believes to be “a ridiculous waste of resources” may not be possible however, as the entrance would still have to be approved by culture bosses because the building, which dates back to the 16th century, is a protected site.