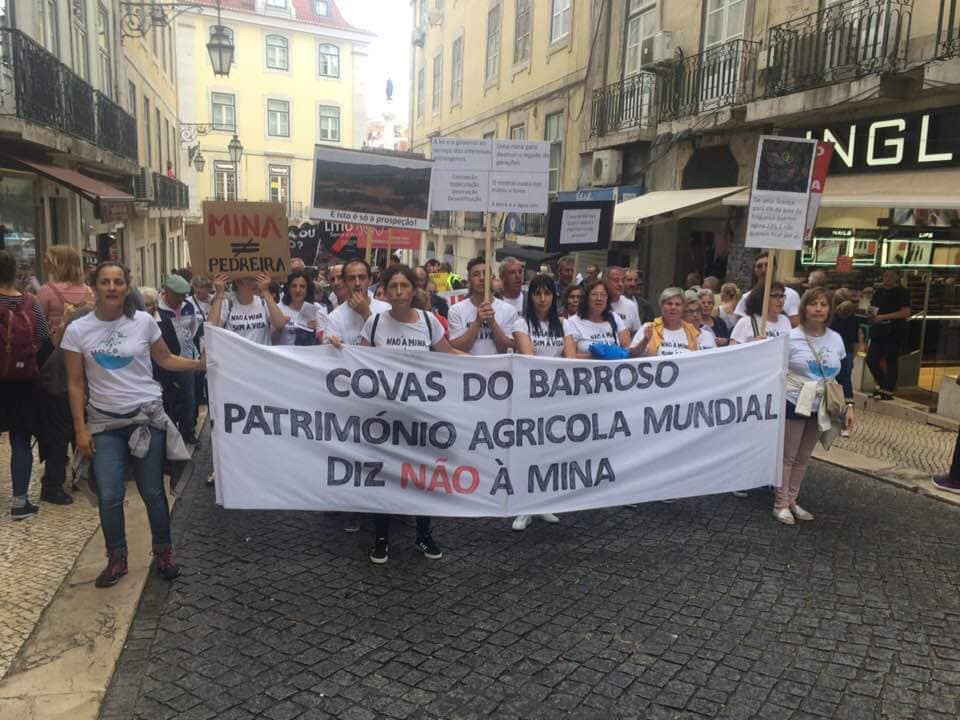 Savannah Lithium cited for “usurpation” in Covas do Barroso

Another round has begun in the civic fight to stop British mining company Savannah Resources – or in this case, its subsidiary Savannah Lithium – from open-pit mining for lithium in Covas do Barroso.

Following villagers’ message to Savannah in May last year that the community will blockade all access ways if the company starts mining as planned, Friday saw the common lands community of Covas do Barroso lodge a judicial action alleging “usurpation” – the illegal seizure of land.

The objective, explains Lusa, is to force Savannah to “re establish common lands (it has managed to appropriate) in their totality”.

A long report by Euronews last year referred to deep concerns of the Association United in the Defence of Covas do Barroso (UDCB), which can only see the World Agricultural Heritage region being devastated if Savannah’s plans move forwards.

Since that article, the company’s CEO David Archer has ‘stepped down’.

Back in 2019, Mr Archer told the Resident that his company was targeting “full scale commercial production in early 2020 when Minas do Barroso will be Europe’s first major lithium mine (…) Our project will help underwrite Europe’s battery industrial revolution (…) it is the most exciting lithium development in Western Europe today”.

Fast forward to today – with many a slip along the way –  and the company faces this latest battle with residents who accuse it of having “unduly appropriated parcels of land through land registries”, effectively taking control of much larger swathes of countryside “than it has a right to”.

Says the community “it is important to understand that common land cannot be occupied and sold in breach of the law in order to extend the project to explore the Barroso mine”.

“We were forced to resort to legal action when we came across deals based on records that the population knows do not correspond to the truth”.

In some of the cases, for instance, “the new areas registered (to Savannah) include tanks, walls and paths that are fundamental to the public management of the common land to which they belong…”

The issue has clearly divided locals in as much as the community’s statement refers to “various co-proprietors who have now been called as witnesses” and in whose name registries were effected.

But more to the point is the  “shock and concern” over what the community dubs Savannah’s “strategy of appropriation of land in order to carry through “at all costs a mining project that is so harmful for the environment and the population.

“It is a collective obligation to fight for the rights of everyone when we see developers acquiring land with a much greater dimension than that which corresponds to reality, to carry out an exploration project for the Barroso mine that, as is well known, does not take legal requirements regarding the protection of the environment into account”, says the statement, referring to the “more than two years” and multiple opportunities that Savannah has had to remedy various deficiencies highlighted in the Environmental Impact Study, which “it still hasn’t managed to accommodate”.

On paper, Savannah stated on July 6 that it has six months “to work collaboratively with APA (Portuguese Environment Agency) to further optimise certain physical aspects of the project’s design and associated environment, ecology and socio-economic considerations and resubmit them for consideration.”

July 6 was the day the company heard APA wanted it to complete “an additional environmental licensing process”. It was also the day that CEO of the last nine years David Archer stepped down with immediate effect.

Once Savannah’s new proposals have been submitted, APA will have 50 days to consider whether or not to emit a much-needed DIA (declaration of environmental impact), without which lithium mining at Covas do Barroso cannot move forwards. According to Lusa, this will take until roughly March 2023.

Interim Savannah CEO Dale Ferguson said on July 6: “We believe the project’s development would still be on track for it to be able to supply concentrate to Europe’s first generation of lithium conversion plants as they come online in the mid-2020s. We, like APA, are committed to delivering an environmentally responsible and socially optimised Project.”

The residents of Covas do Barroso meantime are committed to saving their livelihoods and traditional ways of life.

This has become an increasingly ugly battle – and it’s not over yet.