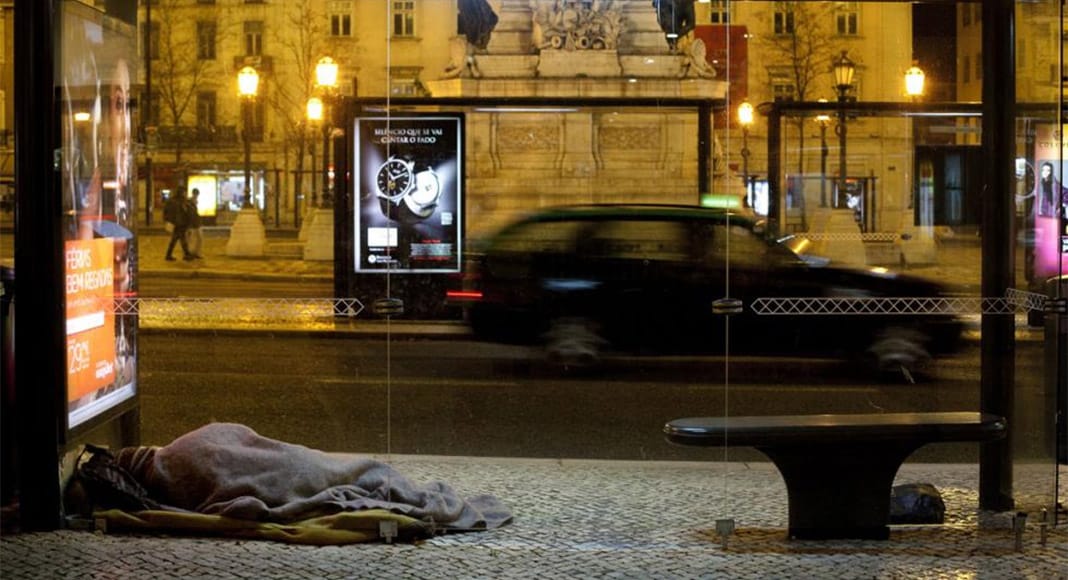 Monday saw Lisbon’s first ‘homeless protest’ – described as an historic event borne from mounting desperation of the rising numbers of people reduced to living on the streets.

On a day when national media focus was divided between the final reopening of the capital’s shopping malls, and the change of finance ministers, TSF radio took the time to report on the cry for recognition as well as dignity of the capital’s homeless.

They no longer want to be invisible, said the station – citing the predicament of António Santos, a former odd-job man who found himself without a job/ home/ prospects five years ago, and has been sleeping in the downtown district, close to the Bank of Portugal, ever since.

The idea for the protest came from a ‘night of conversation’ António had with fellow homeless friend Jacinto.

The pair have noticed “a lot of new faces” on the street since Covid-19 hijacked the country’s economy, explained TSF. These people, like the two street veterans, are without any kind of support to try and recover their shattered lives.

“They feel discarded”, said journalist Cristina Lai Men. “Institutions, the council, the president, the government – none of them give any support”.

Indeed, António recalled the promises made by Marcelo pre-Covid that he would get the homeless ‘off the streets’. Since then, very little has changed.

“We are invisible. But we have to get out of the darkness”, António told TSF. “We want to see light at the end of the tunnel”.

He believes he has a solution, too. There are “a lot of empty houses in Lisbon” in rundown states of abandonment. Why can’t these be used to rehouse the homeless?

António explains that when you have no home, no-one will offer you a job. If you actually get to the point where you are sent for a job interview, the minute you own up to living on the streets “the interview is over”.

No-one wants to reach this dilemma, TSF continued – and that’s why, for the first time, the homeless resolved to rise up to come together.

According to TSF, as many as 1500 were expected for the protest that took place in front of parliament – but the reality was that only 10 actually turned up.

Described as “a woman who cleans but still cannot afford to rent a property in a city with so many empty dwellings”, Carla explained that “many are afraid to show their faces. Afraid of their families and reprisals, or because this is a struggle that won’t result in anything”.

The bottom line was that these people want ‘answers’ and don’t believe in shelters as these give no sense of security and lump too many problematic individuals together under one roof.

Miguel, 26, told TSF that shelters, in the end, only compound the problems of being homeless.

Tragically, the ‘historic protest’ ended with most people in the capital unaware that it had even begun.