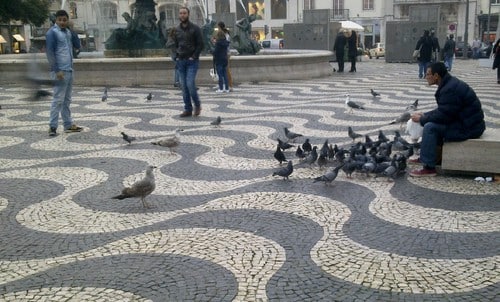 The extraordinary story of a French man who ‘punched and decapitated a pigeon’ in Lisbon all because it ate one of his son’s French fries has highlighted a dismal failing in animal protection legislation.

Even though one of the horrified bystanders called the police, there was nothing, by law, they could do – because pigeons are not included in legislation governing animal cruelty.

Lisbon’s animal Ombudsman Marisa Quaresma says the horrible episode at the McDonald’s in downtown Rossio underlines the “urgency” needed to correct the law.

It’s not just pigeons ‘at risk’, sparrows, gulls “and other species” have been ‘forgotten’ (by that read: not included) and thus anyone killing them, in however vile a manner, can go unpunished.

This particular episode saw the man apparently lash out at the pigeons circling his toddler son’s chips, before grabbing one of them and literally ripping its head off in front of people perfectly happily sitting trying to enjoy their meals.

An eye-witness described blood “spattered all over tables and on the ground”.

A number of children were on the terrace at the time – all of them were left stunned.

Says Ms Quaresma, the man may end up being charged for “many things”: exposing his three-year-old to “a situation of risk for his development” being one of the first. But his hideous act on the luckless pigeon is not the basis for any criminal proceedings.