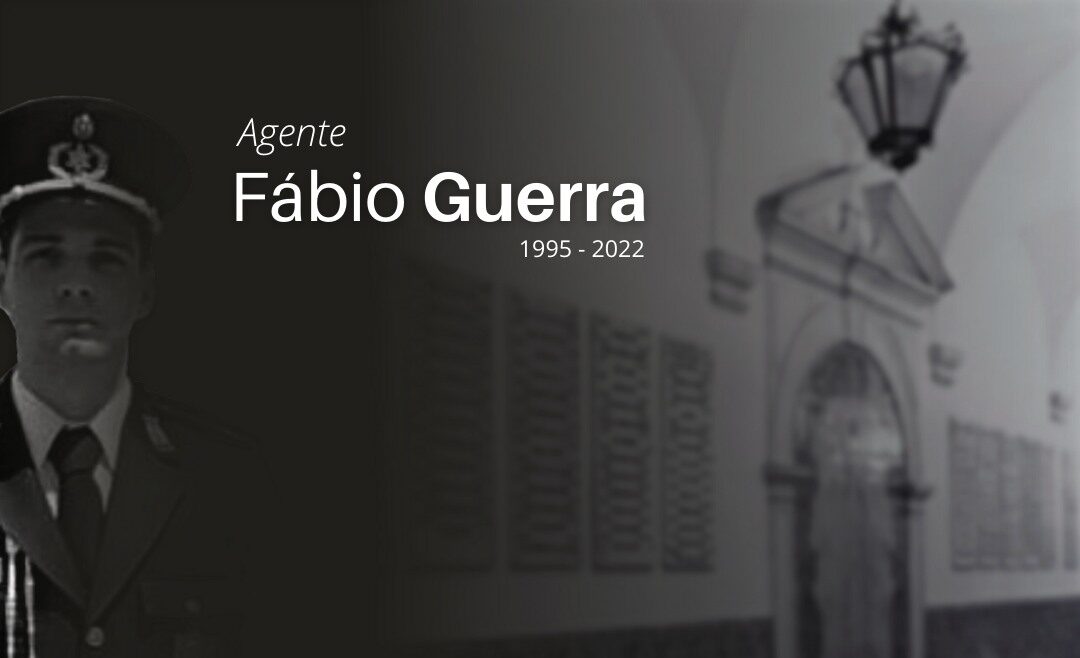 … as police on trail of man they believe dealt ‘killer blows’

The funeral cortege of murdered PSP agent Fábio Guerra is taking to the streets of Lisbon with a guard of honour this afternoon.

Police are encouraging everyone who would like to pay their respects to mark a presence along the way.

Reading between the lines, the procession will cause traffic hold-ups, but such is the sense of horror and sadness over what happened in the early hours of Saturday morning, that hopefully drivers will understand.

Fábio Guerra is being remembered for the brave young man that he was: he simply stepped in to a heated discussion between two groups of angry men to try and mediate some calm. The decision cost him his life.

But while colleagues today are focused on commemorating their lost friend, PJ police are working on all the leads they have to try and trace other men involved in this episode.

The two naval marines already in custody are ‘suspected’ of being involved in the murder; they seem likely to face a gamut of charges for gratuitous violence. But they are not believed to have dealt the ‘killer blows’.

Tabloid Correio da Manhã today infers these came from a young man who had a grudge against police.

A little over two years ago, his 43-year-old father died in a shootout with GNR police in the carpark of a Seixal hypermarket (click here).

Clóvis Abreu, age not disclosed (but most probably in his 20s), was a friend of the two marines, both of whom have repeatedly said they themselves are not guilty of Fábio’s murder.

According to reports, Abreu may have already fled the country. CM gives Spain as a possible destination – but as a Portuguese national he could travel anywhere within Schengen Space, possibly even without having to show identity papers.

For now, there is no information on whether an international arrest warrant has been issued. Simply the statements that Clóvis Abreu is a suspect and is being actively sought.

Fights outside nightclubs are nothing ‘new’. In fact they take place with alarming regularity. Unexplained deaths too have pitted the news in recent years, often linked with ‘nights out’ and ‘Lisbon clubbing’.

José Gouveia of the “association of discotheques” says the issue boils down to a complete lack of strategy.

He has told reporters there should be uniformed, armed agents on duty outside clubs and bars as a matter of course: a kind of “noite segura” approach.

Talking on TSF radio today, he said he hopes this senseless loss of life “is the last incident that takes place at night due to lack of policing”.

Minister of Internal Administration Francisca Van Dunem has brought matters up to speed today: announcing the opening of an inquiry to investigate the facts relating to Fábio Guerra’s death; the creation of a Special Proximity Policing Programme aimed at nightlife areas, and the possibility of creating a mechanism to ensure dependents of agents who lose their lives receive compensation.

Ms Van Dunem, who has been dealing with two ministries for months now, and who has asked to be excused from any future government post due to exhaustion, has also asked that Fábio Guerra be posthumously awarded with the Medal for Distinctive Service to Public Safety.

In a statement she said “agent Fábio Guerra ended up dying as a result of an act of generosity, when trying to restore public peace and displaying a superior sense of mission. He deserves to be recognised for these actions”.