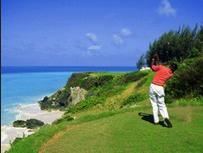 A SURVEY of foreign golfers carried out by the Observatório do Turismo de Lisbon (the capital’s tourism observatory) concluded that the great majority of respondents saw the technical quality of the courses and environment as the deciding factors behind their choice of Lisbon as a holiday destination. As well as these aspects, accommodation facilities were also highly praised.

A total of 565 international golfers took part in the survey, which was undertaken between July and December of 2005. The highest number of golfers from abroad choosing Lisbon in 2005 came from Spain, France and the UK. More than half of those surveyed said they were considering a return visit and practically all (99.8 per cent) recommended the region to play golf.

Most of those interviewed (87.6 per cent) chose to stay at the place they intended to play golf and, of these, 91.3 per cent made the arrangements from their home country. Of those surveyed, 70 per cent used a specialist tour operator for golf holidays and 60 per cent had already visited Lisbon to play golf before. The average number of different courses played during a trip was three.

Of the segment analysed, the majority of those surveyed were men (73.8 per cent), 38 per cent were aged between 36 and 55-years-old, but many were older, with 20 per cent being pensioners.

In the main, those participating in the survey said golf was their main reason for visiting Lisbon, followed by leisure and taking a break from their daily routine. On average, those interviewed stayed 6.3 days, while in 2004 the average stay was 6.2 days. Most chose accommodation on the coast in Estoril and Sintra.

Golf associations and special interest magazines were the principal sources of information for golfers visiting Lisbon, followed by information obtained on previous visits and the advice of family and friends.

Golf as a tourism product plays an important part in the promotional strategy for Lisbon abroad and its growth has also encouraged a deeper interest in the segment. For this reason, the Observatório do Turismo de Lisbon began a study focussing on the international golfer visiting the capital, in order to compile a profile and tailor future promotion of the region accordingly.