British driver Lewis Hamilton says he would love to see the Algarve International Racetrack (AIA) in Portimão, which he describes as one of his favourite circuits in the world, become a permanent fixture on the F1 calendar.

His statement came in an interview revealed by the racetrack’s press office last week ahead of this weekend’s F1 Portuguese Grand Prix to be held in Portimão.
“I would really like it; I think the circuit should be part of the calendar,” he said.

The racetrack seems to have earned a special place in the driver’s heart as it was in Portimão that Hamilton won his 92nd F1 GP last year.

“It was great being in Portugal and the race was spectacular. I grew up watching the Portuguese Grand Prix in Estoril, so it was great to return to Portugal to compete. It was also fantastic to see a new group of fans, something we hadn’t seen in a long time,” he said.

Hamilton’s victory in the Algarve in 2020 also saw him beat Michael Schumacher’s record of F1 wins, a feat which he says he still has trouble wrapping his head around.

“Honestly, I still cannot describe the significance of that achievement because it doesn’t seem real. It is completely surreal: one moment you’re at home watching Michael win all the races, the next you’re on the circuit, competing alongside him; next you’re substituting him, and then you’re matching his records. It is like I am constantly asking myself when I am going to wake up from this dream,” he said.

Revealing that the key to his performance at last year’s Portuguese GP was to stay “calm and level-headed” to avoid making mistakes, the 36-year-old racer described the feeling of competing at the Algarve International Racetrack as “wonderful”.

“It is a fantastic circuit to drive on,” he said. “There are areas where we cannot see the exits, the hills and the ups and downs, and times where all you see is the sky. It is an incredible combination of bends, with the bonus of being able to follow and overtake other cars. The Austin racetrack is one of my favourites, but Portugal has joined the top,” he said.

For this weekend’s race, Hamilton is confident that he has a “good challenge and race” ahead of him.

“This time we know the circuit and the car a bit better, but as we will be in Portugal earlier in the year, I do not know if we will find a cooler climate like last year or if it will be hotter. I also believe Red Bull will be very strong in Portugal, which means it will be a good challenge and race,” the driver said.

The Portuguese GP is taking place this weekend (April 30-May 2) at the Algarve International Racetrack in Portimão. It will be taking place without spectators in the stands due to Covid-19 restrictions. 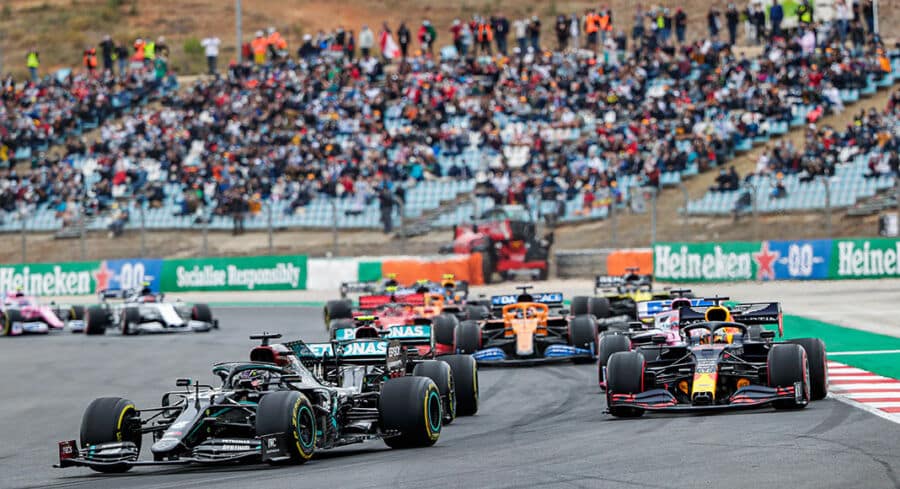