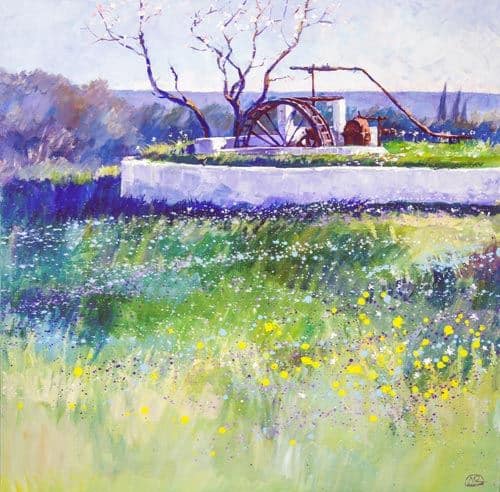 Transforming the landscape of Southern Iberia, the waterwheel was the single most important item of technology to be introduced in the 8th century, shortly after Arab forces invaded from Morocco.
At the time, the waterwheel was unknown in Iberia but it became the best devise for accessing underground water supplies. In Portugal known as ‘nora’ – in English ‘noria,’ from the Arab word ‘na’urah’ – it is the subject of Roma Markov’s latest painting.
The artist is based in Faro and works as Artist in Residence at Galeria Côrte-Real. The original painting is currently exhibited at the gallery located in the countryside near Paderne.
Throughout the Algarve countryside many ‘noras’ can still be seen but most are no longer in working order. They once drew water from a well, passing it through a series of dug-out channels to irrigate the fields.
A donkey or a mule walking in circles was used to turn the large wheel; it dipped down into a well filling pottery or metal containers attached around its rim. At the surface, gravity tipped the water into a trough or aqueduct and the empty containers returned to the bottom of the well in a continuous process.
Both Portugal and Spain benefitted from the ‘nora’ so that for centuries the Iberian fields were far better developed than those in the rest of Europe.
Groves of almonds, apricots, carob, pomegranate and citrus trees flourished. Numerous crops and vegetables could now be grown on what had previously been arid land.
The 12th century Moroccan scholar, Al Idrisi, described the Algarve as a land of beautiful cities, surrounded by irrigated gardens and orchards.
The origin of the waterwheel is something of a puzzle although there is evidence that a similar invention existed in Egypt around 700 BCE. It collected water from a river, the flow filled the containers by immersion and, as the wheel rotated, the upper containers were emptied out into a trough. At around the same time – developed independently in China – the ‘bucket-wagon’ was an almost identical devise.
Five hundred years later, the ‘nora’ – able to draw water from a well rather than a river – was in common use across Iberia. Arab engineers made significant improvements to the design, developing the flywheel and crankshaft to deliver power more smoothly. Once a well was sunk and a ‘nora’ installed, agriculture could be made to thrive.
Other irrigation methods have superseded the waterwheel so that the land around each ‘nora’ has returned to its natural state; parched in summer but at other times of year surrounded by wild plants and grasses. One such scene inspired Roma Markov’s painting. Many of his other images showing Portugal’s countryside are displayed at Galeria Côrte-Real.
“The nora is an iconic image of the Algarve’s agricultural past,” he says.
In parts of Morocco, such as Tagmoute, the ‘nora’ continues to be used. Nowadays wells are hygienically lined and the water treated with chemicals but the method of bringing it to the surface exactly replicates the system that was once used here.
Galeria Côrte-Real is signposted from Boliqueime, Ferreiras and Paderne. It is open Thursday to Sunday, from 11am until 5pm.
912 737 762
By Carolyn Kain
Photo: Painting by Artist in Residence Roma Markov now on display at Galeria Côrte-Real