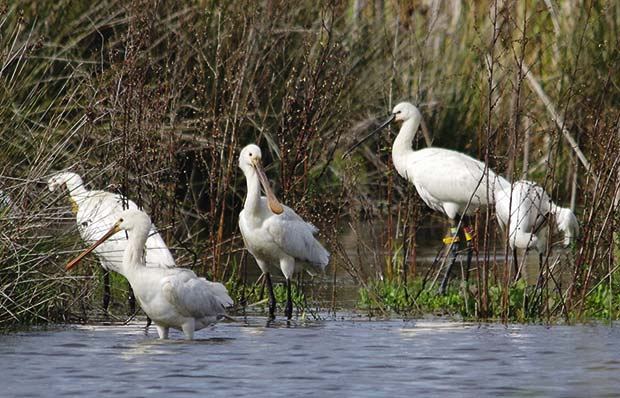 A motion by left-wingers Bloco de Esquerda may be all the exists between Lagoa’s threatened Alagoas Brancas wetland and extinction – and this is what is worrying the group of birdlovers and nature conservationists who are campaigning so hard to save it.

News that BE had ridden to Alagoas Brancas’ defence emerged yesterday (Wednesday), though the logistics are still a bit vague.

According to reports, the party is “recommending” that the government “takes all the necessary measures to preserve the seasonal freshwater wetland… preventing its imminent destruction” and ensuring that a “detailed study of the area” is undertaken to establish its “environmental classification”.

As previous stories have explained, the wildlife haven is scheduled to be concreted over for a commercial space (again, what kind is also vague: some say a warehouse, others a supermarket of which Lagoa already has many).

BE’s “project of resolution” extols the environmental importance of Alagoas Brancas, stressing that “when it fills in the winter months, the place transforms into a feeding, rest and breeding ground for a variety of rare birds, some of which are in danger of extinction”.

And the party mentions the backing the issue has from SPEA (the Portuguese society for the study of birds), and environmental NGO Almargem – criticising the authorisation by “Algarve environmental authorities” for the “unjustified urbanisation of the area”.

But what is worrying campaigners is that this ‘good news’ comes with no indication of when the issue will come under debate, nor does it mean the BE motion will be ‘accepted’.

“We are deeply concerned”, explained leading campaigner Anabela Blofeld. “We really don’t know who is on our side. If the motion is voted against then that could be it.

“We have been back to the ICNF (forestry and nature conservation institute) complaining that the report they did on the lagoon was wholly misleading (click here), factually incorrect and included a number of ommissions. But after a long delay we received an email on December 28 basically saying the same things all over again!

“We have tried PAN, too, for support and after again another long delay, we have been told simply to ‘wait in line’.

“This is why we’re not totally convinced that this news is everything it appears.

The movement that heard late last year that even more rare birds are now being sighted on the lagoon adds that the official version that it rarely fills is also erroneous.

“With just two rainfalls, you can see for yourself, it is full to the brim”, said Anabela.

“We are doing everything we can to highlight this threat, and try and save this very special place.

“As everyone is only too well aware Lagoa does not need any more supermarkets. This place could be developed to bring nature tourism into the town and that could only be a positive thing”.

The BE motion also stresses the ‘nature tourism’ angle, saying preservation of the lagoon could add to the Algarve’s attractions in a way that a supermarket clearly could not.

Meantime, campaigners will be staging an exhibition of photographs to promote Alagoas Brancas at Lagoa library (details to follow).