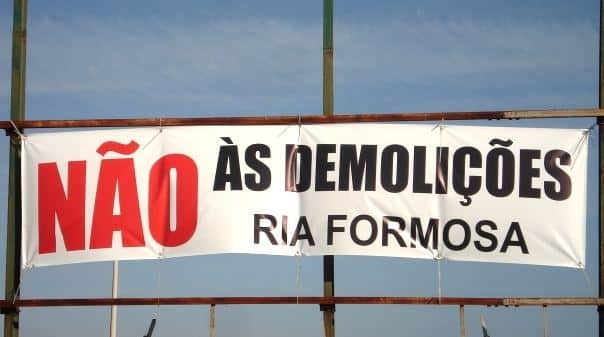 As the countdown to new “surprise” demolitions approaches another “D-day”, battling residents within the Ria Formosa communities of Farol and Hangares have received some welcome news.

Fresh from their audience at Belém palace (click here), their cause has been bolstered by left-wing MPs from Bloco de Esquerda and PCP communists ‘railing’ against perceived iniquities.

Reiterating their position the PCP stress that, in their opinion, the demolitions “have the ultimate objective, in the name of defence of the environment, of slowly but surely expelling local communities from the barrier islands of Ria Formosa to hand this valuable areas over to the interests of economic groups, as has happened over large parts of the Algarve coast”.

“In spite of various promises of investment and upgrading, the only palpable thing that has gone ahead – and continues to go ahead – is demolitions…the PCP reaffirms its promise of support to barrier island populations in their legitimate struggle to defend the right to live and produce in Ria Formosa”.

Stopping short of outright demands, the PCP’s statements were taken a step further by Bloco de Esquerda MP João Vasconcelos who is poised to present a draft resolution to parliament aimed at stopping demolitions scheduled for February 27 in their tracks.

An unwavering ‘friend of the islanders’, Vasconcelo told Lusa on Saturday: “we are going to make all efforts to stop the evictions and the demolitions, despite the resistance shown by the government to comply with resolutions approved in parliament”.

This is the root of the “surprise” registered by islanders as letters dropped through their doors informing them that they had to quit their homes in February.

Earlier agreements led them to believe there would be no further demolitions until their own suggestions had been taken on board, and the matter thoroughly reconsidered (click here).

“There is something in all this, from the environment ministry’s side, that doesn’t smell right”, said Vasconcelos, alluding to “situations more or less similar that have very different treatment”: while the populations of Farol and Hangares are constantly threatened with extinction, neighbours a trudge across the sands at Culatra are not. Indeed, their futures have been overwhelming assured.

“There cannot be different standards for different populations”, he stressed, concluding with the desire that has been constantly shared by islanders themselves:

“We want the government to immediately stop with the compulsory seizures and the demolitions and instead start to implement an effective plan for renaturalising the islands in collaboration with the residents’ associations and representative entities”.

The pressure is on. The clock is ticking.