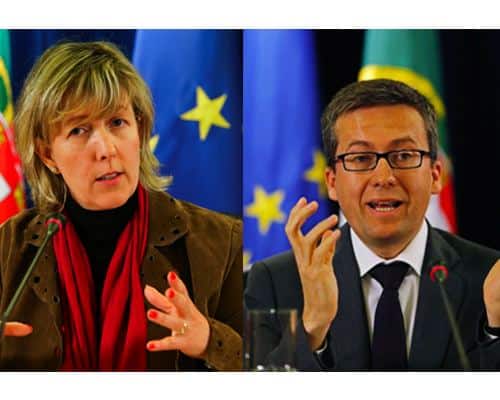 Despite being heavily tipped to represent Portugal in Brussels in Jean-Claude Junker’s new administration, Finance Minister Maria Luísa Albuquerque (pictured) is staying put.
Instead, Portugal is sending Prime Minister Passos Coelho’s former right hand man, Carlos Moedas (pictured).
What kind of fancy footwork went on behind the scenes at the 11th hour, we may never know.
Suffice it to say, Passos Coelho is known to have been horrified at the thought of losing Albuquerque. His ‘best option’ to replace her was thought to have been health minister Paulo Macedo – but with both the economy and the health service in dire straits, it is no wonder the PM balked at any changes.
According to press reports in the Portuguese media, last minute talks between Passos Coelho and Junker went on all through yesterday (Thursday) – ending with the announcement at 9.03 this morning that Portugal’s new commissioner would be Carlos Moedas.
The appointment was greeted by derision from the opposition Bloco de Esquerda, which claimed the choice was a blatant reward for all the work Moedas put in “over the implementation of austerity in Portugal”.
“He was Mr Troika,” Left Bloc deputy Mariana Mortágua declared this morning: “The yes-man for the economic financial elite.
“This choice reinforces our disillusion with the EU,” fresh-faced Mortágua stormed. “More and more we are certain that we can expect less of an EU that follows these interests and moves away from the people of Europe.”
Moedas’ new job will certainly see a fat pay cheque – and if, as the Left Bloc suggests, he represents the “continuity of austerity” in Brussels, Albuquerque certainly represents the same here in Portugal.