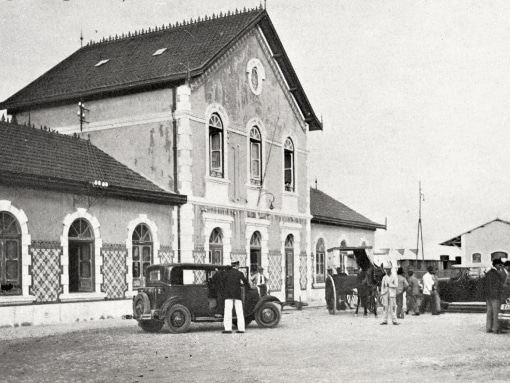 Lagos will celebrate the 100th anniversary of the arrival of the first train to the town with a series of commemorative events on Saturday, July 29 and Sunday, 30.

“The press at the time echoed the event, which attracted the presence of important figures of national politics and was met with euphoria by the local population,” Lagos Council says in a press release.

“But documents also show how difficult and morose the process was to make that very desired connection a dream come true,” it adds.

“Remembering the event, those involved and understanding the social, political and economic context is one of the goals of this initiative, which apart from seeking to recover the historical memories also seeks to spark a reflection around the role of the railway today, given the challenges of sustainability,” the council concludes.

Celebrations of the historical mark will begin with a colloquium on Friday, July 29 at Lagos Cultural Centre.

Entitled ‘100 Anos da Chegada do Comboio a Lagos – passado, presente e futuro’ (100 Years Since the Arrival of the Train to Lagos – past, present and future), the event will bring together reputed lecturers specialising in historical investigation, mobility and transports, as well as representatives from key entities of the sector such as infrastructure authority Infraestruturas de Portugal (IP), railway operator Comboios de Portugal (CP) and the foundation of the national railway museum Fundação Museu Nacional Ferroviário (FMNF).

The colloquium will begin at 9am and run until 5.30pm. Admission is free but signing up is mandatory.

Festivities continue the next day with the arrival of a “commemorative train” at Lagos train station at 11.55pm, followed by a musical performance by Sociedade Filarmónica Lacobrigense 1º de Maio and the inauguration of a sculpture by João Duarte which will be installed on the roundabout between the former and new train stations of Lagos.

In the afternoon, a protocol will be signed at the Cultural Centre celebrating the shared management of the Lagos hub of the National Railway Museum. Also planned is the unveiling of commemorative medals and stamps and the inauguration of a photography exhibition entitled ‘Lagos, a última paragem’ (Lagos, the last stop), which will remain on display at the cultural centre until the end of the year.

Local association Questão Repetida will also unveil its own photography exhibitions marking the centenary – ‘No Fim da Linha’ (At the End of the Line) by Telma Veríssimo and ‘Pouca Terra, Pouca Terra’ (which translates literally as ‘Little Earth’ but is a sentence repeated in Portuguese to simulate the sound of a train riding on the railway) by Andreia Inocêncio.

‘No Fim da Linha’ will be inaugurated at the Arte Doce fair where it will remain on display until July 31, after which it will be moved to the Anel Verde park where it can be visited until December 31.

Meanwhile, ‘Pouca Terra, Pouca Terra’ will be inaugurated on Friday, July 29 and displayed on the back wall of the local Docapesca building until the end of 2022.

Both exhibitions are part of the association’s Trechos art/photography cycle, which aims to “analyse the impact of the arrival of the train to an extremely isolated and rural area and observe the transformation that happened during a century.

“The Algarve railway was always so important to the region, but at the same time, so forgetful of the interests of the population it serves,” says the association, adding that it also provides “one of the most beautiful trips across the region, far away from the tourist attractions and drawing a border of an Algarve of deep contrasts.”