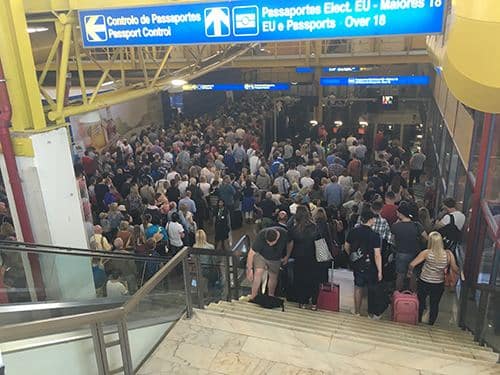 Members of the Sovereign Group team in Lagoa helped put out a fire that had started in public bins near their office in the town’s industrial park on Friday, May 13.

The fire, which started at around 3pm, was extinguished by the Lagoa firefighters but before their arrival, Ann Wheatly and Nigel Anteney-Hoare from Sovereign, along with another worker in the area, ran to the scene equipped with fire extinguishers to keep the fire under control.

Their colleague Cristina Xavier told the Algarve Resident on Monday: “The fire was pointed out to us by a worker who had walked by and noticed that cardboard had caught fire. As we looked down from our office windows, we noticed that the flames were getting quite large.

“We dialed 112 immediately to send for the fire brigade, who took about 10 minutes to get here. Just in time to put out the flames that were about to reach a palm tree. But, in the meantime, our courageous colleague Ann rushed down with one of our extinguishers to start the job. Nigel soon went after her to help out as well.”

Another worker from one of the other offices in the industrial park also helped and managed to control the fire while the fire brigade was on its way.