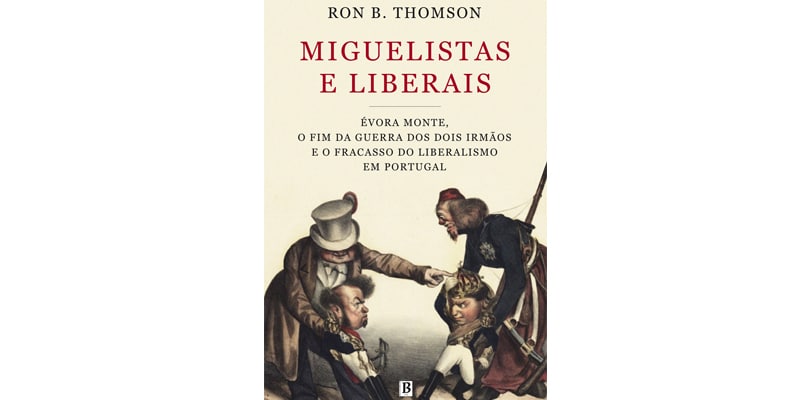 A new book by Dr. Ron B. Thomson, of the Pontifical Institute of Mediaeval Studies in Toronto and resident of Lagoa, is being published this month by Bertrand Publishers.

Miguelistas e Liberais is the Portuguese translation of Thomson’s The Concession of Évora Monte which appeared in 2014. Subtitled “The Failure of Liberalism in Nineteenth-Century Portugal”, Thomson focuses on the political history of Portugal from the Peninsular War to the end of the reign of Maria II (approximately 1807-1853).

This is a period when the monarch, whether an absolute monarch or one governed by a constitution, was the key figure in the governance of Portugal.

At the time, supporters of liberalism tried to impose their ideas on this country, either through revolutions or a series of new constitutions, but their temporary successes were undermined by the factionalism of the liberals and by the fact that the rural countryside containing the vast majority of the population was not interested in these new ideas which offered them no advantage but, in fact, threatened to undermine their daily subsistence.

Miguelistas e Liberais documents the Revolution of 1820, the three constitutions of 1822, 1826 and 1838, the usurpation of the throne by Dom Miguel and the War of the Two Brothers in which Dom Pedro succeeded in recapturing the throne on behalf of his daughter, Dona Maria II. The book also outlines the turbulent period of Dona Maria’s reign, until a form of power sharing reappeared in the last half of the century.

Thomson argues that despite the general view of the success of liberalism, it, in fact, failed to establish itself outside of the larger urban centres, and he attempts to show that this occurred because of the fundamental nature of Portuguese society and economy.

There will be a presentation of the book at the Lagoa Municipal Library on Wednesday, February 27 at 6pm. The event will be in both English and Portuguese, and copies of both the English edition and the new Portuguese edition will be offered for sale. The general public is invited to attend.