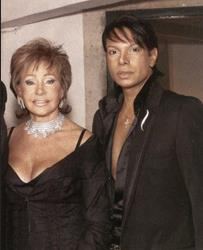 At a recent presentation to announce the event in Monte Gordo, which is hosting the party for the first time this year, Castelo Branco revealed: “I only know Vilamoura, Vale do Lobo and Albufeira. I am surprised by the tranquillity of this area (Monte Gordo).”

Castelo Branco said that his mission was to promote VRSA, adding that he will be wearing several different costumes, all designed by national costumier, João Rolo. “There’ll be plenty of feathers,” he teased.

The socialite also revealed that, after taking part in the carnival festivities, he is planning on doing some filming in Monte Gordo for his new programme for TVI channel.

By choosing Castelo Branco, who in recent years became famous in Portugal for his appearances on reality TV shows, as well as for his unusual clothes and make-up, the council hopes that more people will attend the carnival celebrations at the far eastern end of the Algarve.

Talking about the decision to approach a national figure to take part, Luís Gomes, President of VRSA Câmara, commented: “We want to give this party more glamour. The council’s strategy is to stage less events per year but of a higher quality.”

The theme of the VRSA Carnival is going to be the “230 years of the borough” and celebrations will include a parade of 10 colourful floats and 400 dancers and revellers in costumes. The float parade will take place on Sunday, February 26, in VRSA, and two days later in Monte Gordo.