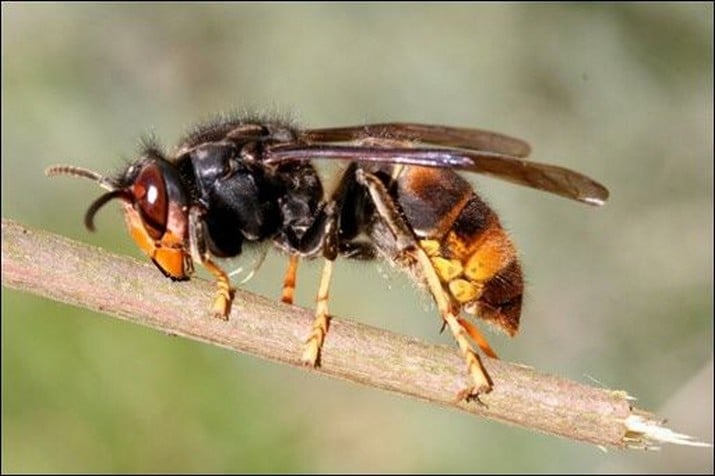 This is not simply due to the likelihood of more people suffering stings – which can prove fatal – but more to do with the fact that bee colonies are now so ‘conditioned’ by the hornets’ presence that they simply dare not leave the safety of their hives.

Explains the national federation of beekeepers, this spells financial ruin for their members, but more to the point, it threatens agriculture as a whole.

“Without pollination, there is no fruit”, explained João Valente of the beekeepers association in the north of the country where this year almost 5000 nests of killer hornets have been identified.

Honey production is down in these areas by 30% , said federation spokesman Manuel Gonçalves – and this translates into a loss for beekeepers of around €2 million.

The worst of this scourge is that it appears ‘unstoppable’.

Bit by bit these predators are heading south, and killing many other insects as they advance.

And although the ministry of agriculture is ‘elaborating a plan to make people aware’ of all the dangers, beekeepers ‘on the ground’ say response is just too slow.

José Manuel Grosso-Silva, curator of Porto’s natural history museum, has told reporters that “at the start of the spring, after hibernation, queens that start new colonies should be caught, which has not happened”.

There is a hope, however, that the hornets’ advance on the south of the country will be conditioned by lack of water sources.

These insects require water to help with nest construction as they create their ‘monster nests’ by ‘chewing wood’.

Said Grosso-Silva, we just have to wait and see now. The hornets may naturally confine themselves to the north and centre of the country… “or they may adapt”.

In UK, scientists are purported to be developing battery-operated devices to track the hornets back to their nests where they can then be eliminated.

Say reports, it costs municipalities roughly €100 to destroy primary nests, double that for secondary ones.

When the Resident wrote about this threat almost a year ago, we heard from one reader in the north how buzzards ‘could be the answer’ (click here) as they appear to be attacking killer hornets’ nests.