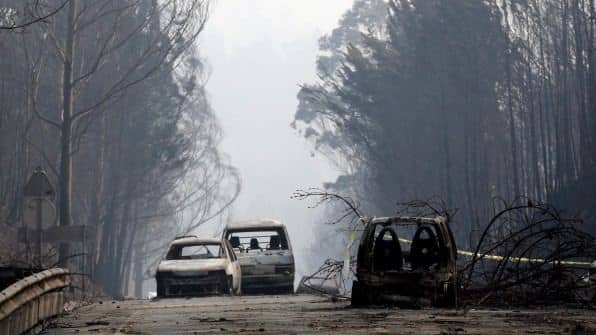 Almost six months since the summer’s first ‘killer fires’ that took the lives of at least 66 people, survivors are united in their sense of outrage over the continued dithering of Portugal’s authorities – not least the government.

Whether survivors of the fires of Pedrógão Grande in June, or those around Oliveira do Hospital two months ago, the bottom-line message is the same, the agony has been dealt with appallingly.

In the centre, where victims and survivors are committed to battling to be compensated in the same way as victims and survivors in Pedrógão Grande – leading to allegations that the government is trying to establish 2nd and 3rd class citizens – chief campaigner Luís Lagos is demanding that the €70,000 minimum compensation set for families who lost loved ones be paid immediately, as there are many instances where people “cannot meet their basic necessities”.

In Pedrógão Grande the pressure is also intense, with the voice of the association of victims alluding yet again to the possibility of suing the State for negligence.

It is an hypothesis that Nádia Piazza first raised in July, calling the way the authorities were treating victims of the worst fires in Portugal’s living memory “surreal” (click here).

Five months on and her disgust remains. She told reporters over the weekend: “There is space to sue (the State).

“INEM, firefighters and the GNR all failed in their actions of help on the road of death (the name given for the EN236-1 on which 47 victims lost their lives, the majority entering “spontaneous combustion” due to the intensity of the heat).

“They chickened-out”, she added, asking, “and I am meant to put my life in the hands of these people?”

Three months ago, tabloid Correio da Manhã suggests arguidos (official suspects) would be named “as early as October” following a PJ police investigation into the horror of Pedrógão Grande.

The paper claimed police had already found evidence of negligent homicide in the mounting death toll – at the time still set at 64, (click here).

“Negligence goes from emergency response, Civil Protection, to the performance of GNR agents who send drivers onto the road of death” – the EN 236 where no less than 47 people died in scenes reminiscent of a Hollywood disaster movie”.

Motorway concession holder Ascendi was also cited, said the paper, for the responsibility it has to keep verges clear of vegetation.

Today, the likelihood of charges has been pushed forwards to “the end of the month of January” as the mayor of Pedrógão has told reporters that he expects the after-effects of the fires to last years.

Complicating the mix is the controversy that blew-up following the government’s censoring of one of the most impactive chapters of the post-fire report overseen by forest fire expert Domingues Xavier Viegas (click here).

Xavier Viegas is vehemently against the government’s censorship of Chapter 6 (which dealt with the identities of the dead and how they died )and has now aligned himself with the association of victims as it raises a petition to demand its publication in full.

The government’s reasoning for redacting the names was to protect the families involved, but as Nádia Piazza who lost her five-year-old son in the inferno has said, “the private pain has passed”.

What is paramount now is to get everything that happened out in the open so that those left behind do not remain with unanswered questions, she explained, adding: “There were people who survived the passage of the fire and then died alone on the road, without help. An outrage.”