Portugal Resident
Home Lifestyle Nature Keeping up with the Spoonbills 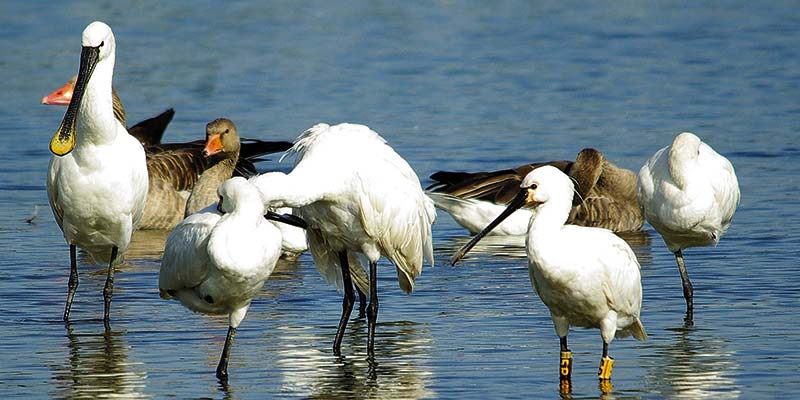 Ornithologist Dr. Manfred Temme reports his encounters with a Dutch Eurasian Spoonbill through the years.

Scientific bird ringing, or banding, began on the Curonian Spit, in former East Prussia, where the world’s first ornithological observatory, the Rossitten Bird Observatory, was founded in 1901.

There, many small migrating birds were caught and fitted with aluminium rings with a stamped number and then released. Later, around 1910, the famous German bird observatory Helgoland also began doing these scientific works.

In order to avoid catching the birds to read the rings, and consequently disturb them, ornithologists started attaching plastic rings, especially to large birds. Soon began an intensive research programme about the Eurasian Spoonbill in the Netherlands.

During the bird migration, mostly from north to south, many spoonbills from the Netherlands and Germany come to the Algarve. Here, ornithologists use strong magnifying binoculars to read the colour combinations of the rings and report the sighting to the ringing centre in the Netherlands.

The travels of the Dutch Eurasian Spoonbill with the ring code aBYf/LYB begin in the Dutch island Schiermonnikoog, where the bird was born in May 2009.

Three weeks later, when his legs were strong enough to keep the rings from sliding off, he, like other young fellows in the nest, was fitted with five different coloured plastic rings and one aluminium ring. The code of the ring combination means: left leg – aluminium, blue, yellow with flag; right leg – lime, yellow, blue. The ‘a’ represents the aluminium ring with a stamped number.

In September 2009 his wings had already flown him about 800km away, to France, and in November he reached the Algarve. Here he remained and in the winter term of 2009/2010 I saw him 14 times in the wetland area of Alagoas Brancas, on the outskirts of the city of Lagoa.

In the two following years I found him again in this wetland. Later he was seen by colleagues of mine in France and in Spain, before leaving the Algarve – as so many young spoonbills do – for the main wintering area in Mauritania (northwest Africa), where over 10,000 spoonbills can be seen during the winter.

As spoonbills become sexually mature at three or four years, our aBYf/LYB also flew to the Netherlands, where he was seen twice in his native breeding colony. Interestingly, I also saw him in the German island Norderney in August 2016. For the winter he flew over Spain back to his favourite wintering area, Alagoas Brancas in Lagoa. There, I met my old acquaintance again several times in February and March 2017.

There are other fellow spoonbills with similar flight routes. One of them I nicknamed “Limper” (LBYf/RaY), because when I first saw him he had three stiffened toes on the right foot, which caused him to limp. He also has shown great loyalty to his breeding colony and to his wintering area. He was born in Schiermonnikoog in 2012. In the winters between 2012 and 2014 he was spotted in different wetlands in the Algarve. The three following years he decided to visit his favourite place: Alagoas Brancas, where I spotted him 35 times until the end of March 2017.

What I had not expected from this severely injured bird was that in May 2016 he made his way back to his native breeding colony in Schiermonnikoog. He has learned to live with his disability and I hope to see him again next winter in Alagoas Brancas.

I also have seen another spoonbill that has travelled several times between Norderney and the Algarve, the 20-year-old spoonbill with the code W(5R)/aB(5R).

In the last couple of years I could read about 30 ring combinations of spoonbills. Some of them have very interesting and adventurous lives. Several times I could identify up to eight ring combinations in spoonbill squads of 20 to 30 individuals. The ringing station at A Rocha (Cruzinha) in the Ria de Alvor has done a great job, and from the natural park of Doñana in the neighbouring province of Andalusia arrive reports about the travels of numerous ibises ringed in southern Spain – all of this confirms the importance of the Iberian South for the development of bird populations.