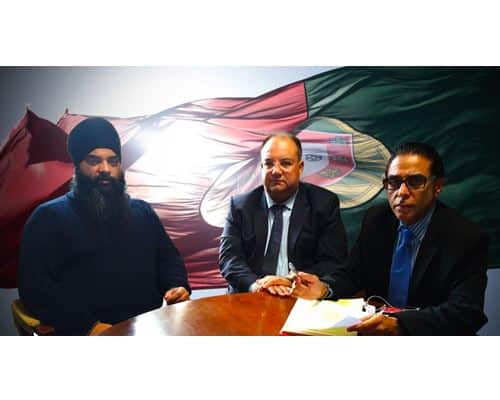 After all the ‘blood, sweat and tears’ in the two-month battle to free Indian sikh Paramjeet Singh from a ‘bogus’ extradition warrant that could have spelt his death, campaigners today received the news they had been waiting for.

Portugal’s Justice minister Francisca van Dunem has rejected the request by Indian authorities to release the 42-year-old father-of-four to their custody.

Police officers who had arrived from the Punjab to pick Mr Singh up had already been ‘routed’ by a criminal complaint put in by Mr Singh’s legal team alleging past acts of torture of prisoners in jail.

But now India’s bid to detain Mr Singh on what it called terrorist charges has been firmly kicked in the teeth.

Human rights lawyer Gurpatwant Pannun – who has been at the head of the legal fight since Mr Singh was arrested in Albufeira before Christmas – is now on his way to Beja jail to secure his client’s release, and prepare for an emotional journey home.

This has been an issue that inflamed sikhs across the world.

Since taking up the story in December, the Resident has been in touch with multiple sources, all of whom stressed India’s appalling human rights record.

A member of Mr Singh’s defence team told RTP news today that the arrest was politically motivated from the start.

“It is not the first time Interpol Red Notices have been used for political purposes”, the spokesman for Sikhs for Justice told the news channel.

Later this evening, RTP will be covering a special report on the story from 9pm.

But for now, Mr Singh’s family and thousands of supporters throughout the world are celebrating what all agree is a situation where common sense has fortunately been seen to have prevailed.

The statement coming from the Justice Ministry shortly after midday today said the extradition request had been found inadmissible due to the fact Mr Singh held refugee status – awarded by the British government in 2000 – and as such, was at liberty to travel freely to other EU countries, including Portugal.

“A large part of the facts on which extradition is requested occurred in India at a time when refugee status had already been attributed by the United Kingdom”, added Francisca Van Dunem, stressing the reasons for giving Mr Singh asylum had not changed since Britain opened its doors to him.

Citing all the laws and conventions used by Mr Singh’s defence to attack the extradition bid, the statement from the Justice Ministry concluded that “these various legal standards” prohibited Portugal from sending Mr Singh back to a country “from which he had allegedly been persecuted and ran the risk of persecution”.

MPs throughout the UK have lobbied the British government and here too, a parliamentary commission on Constitutional Affairs only last week joined the campaign, sending its own petition to minister Van Dunem.

Meantime, efforts by the global sikh community saw protests outside Portuguese embassies throughout North America, Europe and Asia, including a 200-strong protest in Lisbon outside parliament last week.

“We’re delighted by the news”, reports the Sikh Federation today, stressing it is “grateful that the Minister of Justice in Portugal has rejected the false case by the Indian Government and its efforts to defame the Sikh community and Paramjeet Singh”.