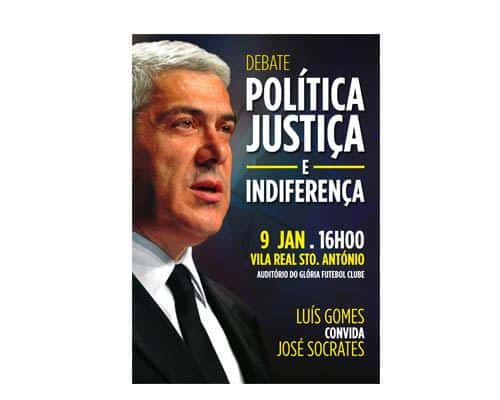 José Sócrates will be the high-profile guest of a debate on “politics and justice”, scheduled for Saturday (January 9) at Vila Real de Santo António’s Glória Futebol Clube auditorium.

Marking one of his first public appearances since his TVI interview last month, the debate begins at 4pm and will see Sócrates speaking about the suspicions of fraud, money-laundering and corruption that saw him incarcerated for several months last year. The former prime minister has always defended his innocence, saying “there is no proof” of any wrongdoing on his part.

What is remarkable about the invitation is that it came from a PSD-run council – the biggest rival party of the Socialist Party (PS) that Sócrates headed as PM between 2005 and 2011.

The invitation stemmed from the “huge relevance” of Sócrates’ case, which VRSA mayor Luís Gomes described as “the hottest media topic in terms of justice”, discussed in Portugal on a daily basis.

He added that the debate also has a broader goal – “to assess and discuss the weaknesses that Portugal’s government entities, the judicial system and the media showed when dealing with an unprecedentedly popular legal case”.

“We want to host a forum where guests and the public can question, debate and put forward valid proposals about divisive topics in a country guided by the rule of law,” he said.

As the Resident reported in October, José Sócrates has been in popular demand since he was released from prison, receiving countless invitations for events like this one (click here).