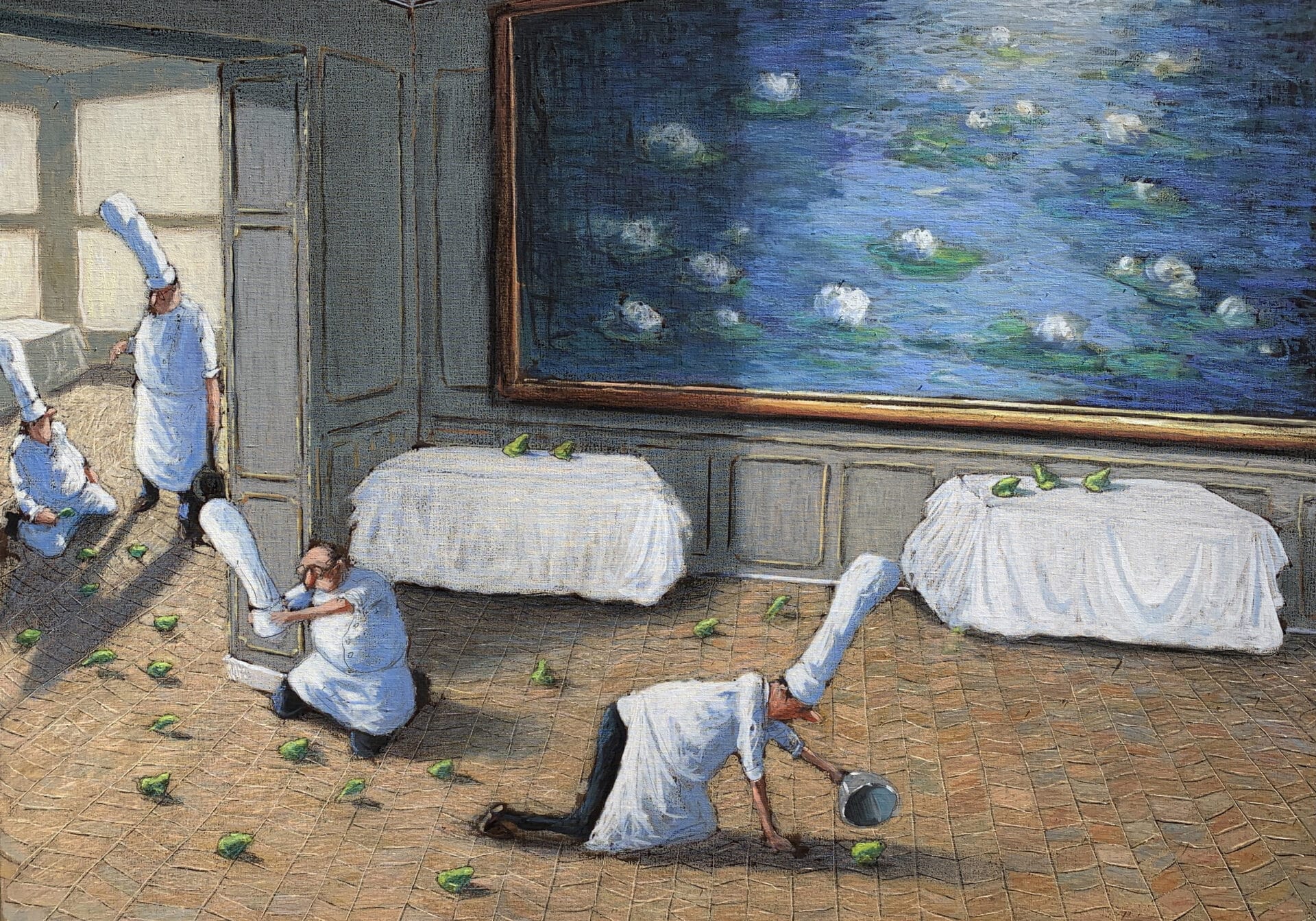 Looking at Thomas Bossard’s paintings, it is impossible not to smile

The humanity and humour imbued in Thomas Bossard’s works are just too much. His quirky illustrative characters, his chefs and waiters, his museum visitors and diners are all caught up in a drama often not of their own making. They play out a comic narrative, a moment of action and reaction – the devastation of a ruined broth, a spilled soup or even the quieter impact of a masterpiece.

This idea of an internal world, of a play within a play, stems in part from the decade Bossard spent working at Théâtre du Capitole, in Toulouse, the opera house being the perfect inspiration for an artist as a place of performance, where the tragicomedy of human existence is there for all to see. After all, the true power of art is that it can transport us through space and time; that can fire the imagination and make us in equal measure laugh and cry. He has a range of artistic tools at his disposal to create scenes that are both funny and touching. “Working in a historical theatre has enabled me to express my artistic palette in all its’ richness: Illustration, painting, scenography, frescoes and photography,” the artist explains. “During my career, I have also created storyboards for short films.”

Thomas Bossard was born in Poitiers, France, and went on to study Art at the prestigious Saint Luc School, in Belgium. He came from a large family who encouraged his creativity, and his mother used to take him regularly to museums and galleries. The young Bossard was particularly struck by the works of Velázquez, Vermeer, and Rembrandt. For him, these great artists were master storytellers, be it the intimate moments captured by Vermeer or the full-on drama of royalty and nobility displaying their wealth and status. Take, for example, the world-famous Las Meninas (1656) by Diego Velázquez, which can be seen in the Prado Museum, in Madrid.

Bossard was aware of this artwork growing up and the whole mise-en-scène and composition intrigued him. In this painting, the artist is seen working on a large-scale portrait of the king and queen (seen as a reflection in the central mirror) but the focus is on the young Infanta Margaret Theresa who occupies the central space, staring out directly at the viewer, and around whom are the maids of honour, chaperone, bodyguard, two dwarfs and a dog.

Bossard clearly delights with playing with the notion of artifice. His little characters, with their distinctive noses and bodies, are illustrations in the tradition of English cartoonist, caricaturist and illustrator Quentin Blake, yet they respond to more classic works of art, such as Degas and Toulouse-Lautrec, which are themselves representations of reality. His chosen subject matter often reflects a personal history. The dance school is particularly poignant as he watched his young daughter take up dancing and transform herself from a clumsy child into a graceful ballerina, whilst the kitchens and restaurants come from a life-long friendship with a leading chef and restaurateur in Toulouse.

For Bossard, both cooking and dancing, when taken to the highest level, are fiercely competitive, requiring total dedication and perseverance. Therefore, the underlying seriousness is ripe for mockery; a disastrous dish can take on epic even melodramatic proportions. There is a knowingness on the part of the viewer that these little people are victims of fate and, to some extent, of their own hubris. There is a sense of catharsis as we identify with their awkwardness and fragility as he deftly touches on the human condition with all the absurdity that entails. “Like a child brilliantly spoofing adult life, Thomas Bossard is not only a talented painter but also a great humourist. A loyal disciple of James Ensor and Honoré Daumier, Thomas Bossard has a taste for drama and an eye for portrait painting. Along with these two qualities, one has yet to add the innocence – or even the tenderness – with which he mocks his own subjects,” said Frédéric-Charles Baitinger, from Art-Up Mag.

Bossard is truly an artist who knows how to tell a story and how to create a quiet drama. His characters and figures exhibit real emotions and feelings. We recognise them, we identify and ultimately sympathise with them, for we know what it is like to struggle and fail yet, at the same time, have a laugh and then pick oneself up and start all over again.

“He paints scenes and people with insight and humour on the human condition. I love the attention to detail, you have to keep looking to pick up all the nuances.

I have always been drawn to the voyeur artist in art history,” states Gillian Catto, founder of Artcatto Gallery, in Loulé, which is preparing to host an exhibition of the artist’s works in April. “Bossard loves his subjects and teases them. He is his own master and dances to no other artist’s tune. I smile whenever I see his work. That makes him special to me.” 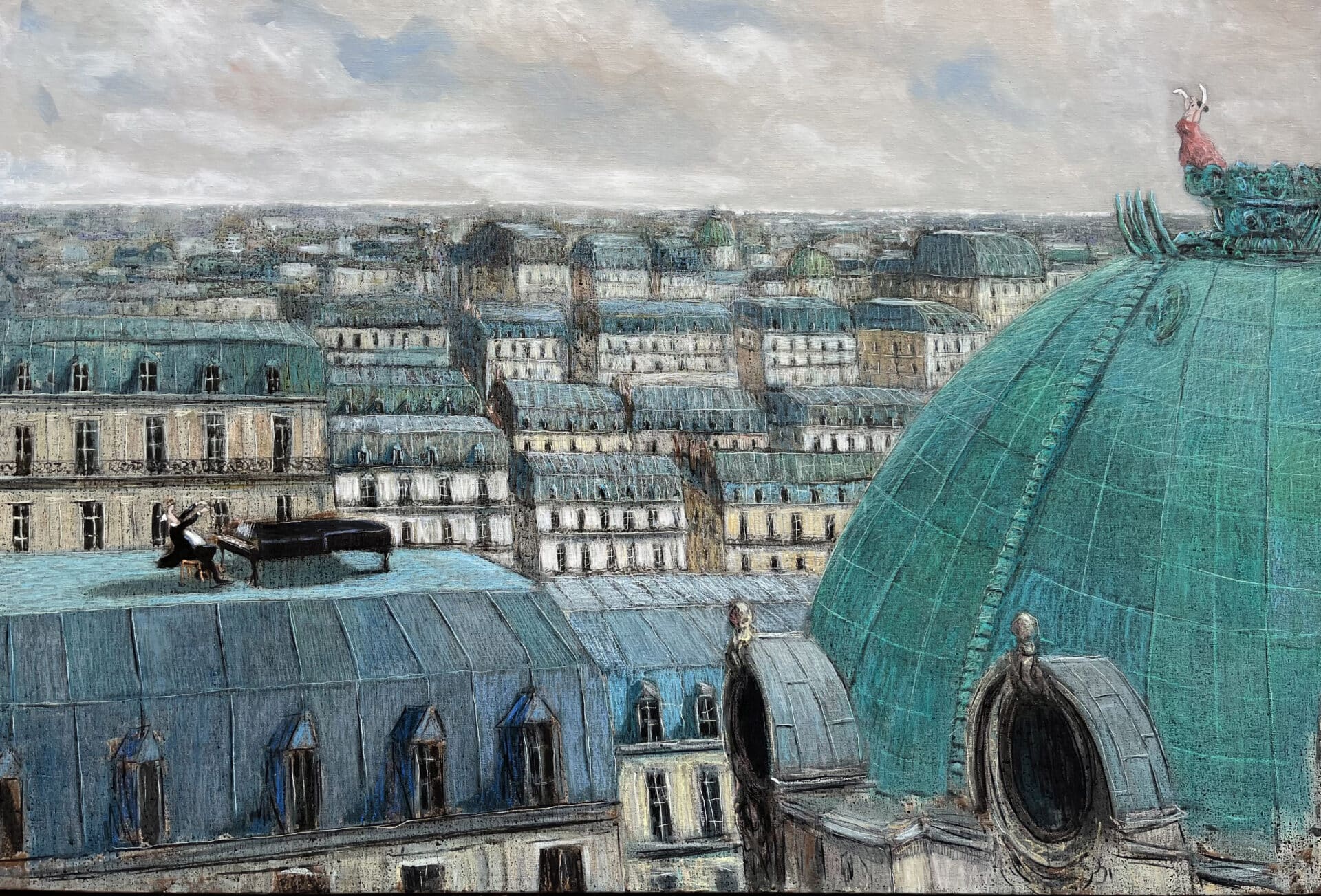 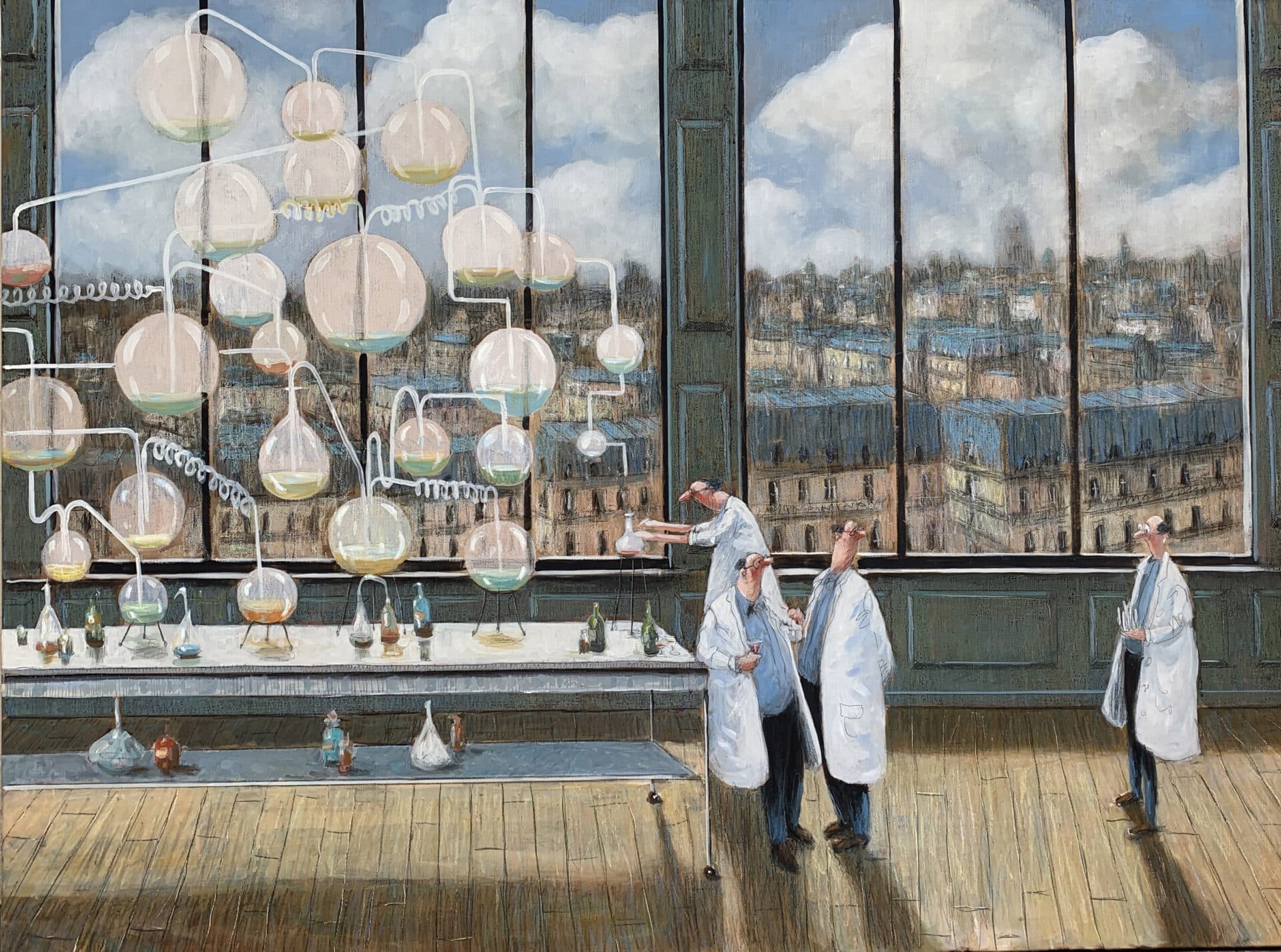 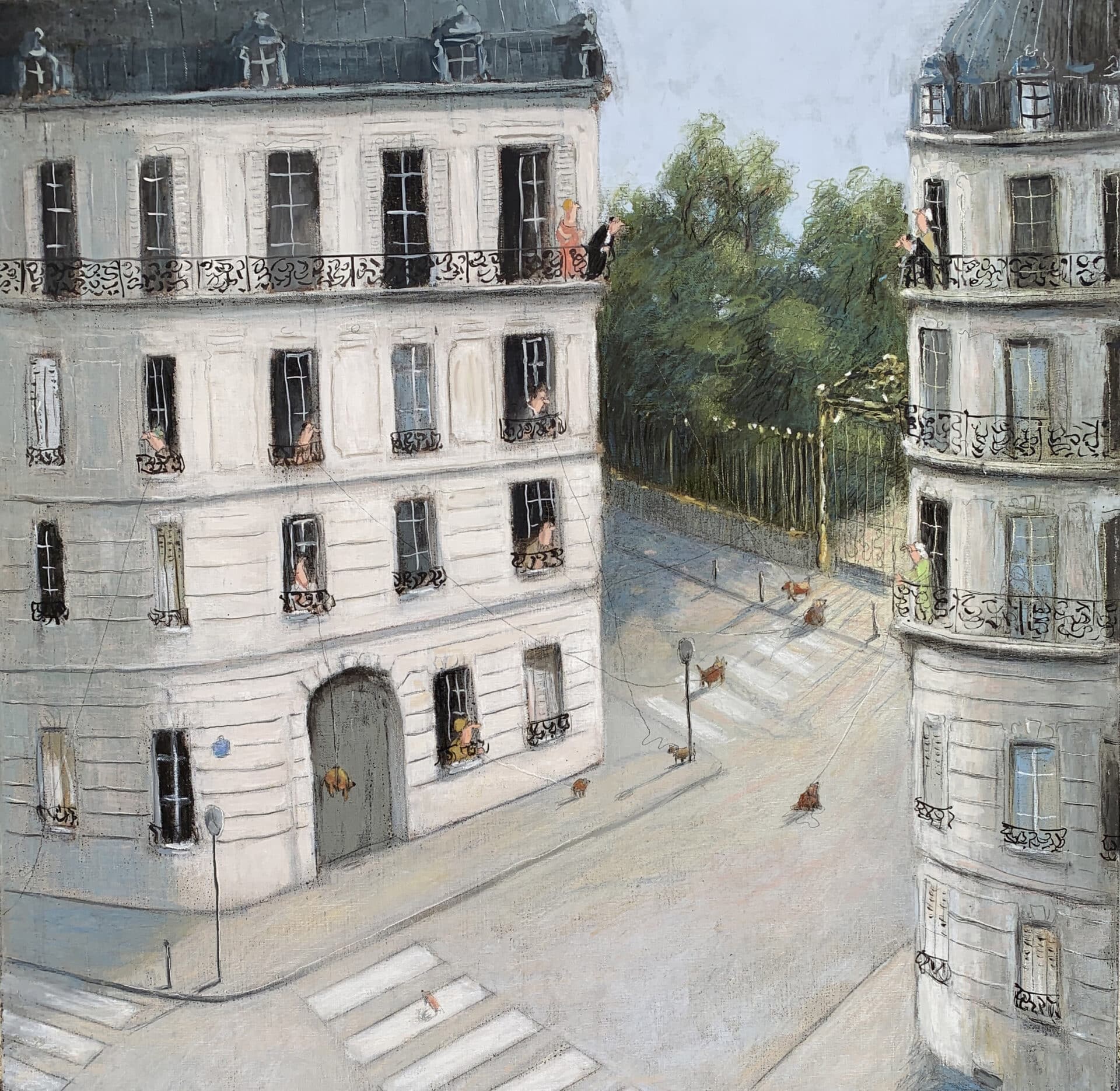