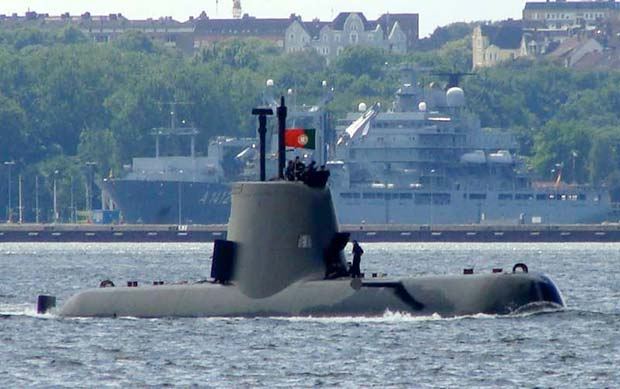 One of the ‘jinxed Portuguese subs’ purchased in a controversial deal tainted by accusations of corruption has just returned to naval shipyards in Almada, south of Lisbon, after months of work in Germany – only to start taking on water.

The ‘leak’ was identified in one of the torpedo missile launch tubes, but very little seems to have been made of it.

Almada Câmara’s website has instead concentrated on the fact that this is “the first time that a submarine of the kind that Tridente is has entered a Portuguese dry dock”.

And this is the positive side of the story. Moving swiftly past the fact that one of the notorious subs that have cost the country well over a billion euros and rising is still ratcheting up unforseen repair work, Portugal’s focus now is on a new ‘partnership agreement’ between the German boatyard the originally built Tridente and her sister sub Arpão, and Almada’s Arsenal do Alfeite yard.

Further positive spin is the fact that the cost of repair work to the leak is “covered by guarantee”, stresses Diário de Notícias.

Thus the significance of water coming in after months of maintenance work in Kiel is swept under the proverbial keel.

Tridente’s repair should take “around two weeks”, say reports, while Portugal is intent on making the first steps towards attracting other heavyweight naval repair ‘business’ “from Africa and South America”, says DN – explaining that these are both countries that have also purchased German-built submarines.

Once Tridente’s leak is fixed however, the next ‘client’ is Arpão – and her overhaul is scheduled to take up to a year, “a period in which Arsenal do Alfeite will not be able to take in further boats”.

This means ‘any other business’ will have to be subcontracted out to third parties, like Naval Rocha, a yard in which the State holds a minority shareholding.

Tridente and Arpão were names on everyone’s lips during the PSD government of Passos Coelho.

It was Passos Coelho’s defence minister Paulo Portas who brokered the controversial deal that has had opponents – particularly MEP Ana Gomes – demanding serious scrutiny for fraud.
The ‘case’ however was brought to a shambolic close in 2014 with none of the accused receiving any convictions.

The subs meantime have gone on costing the taxpayer dearly: their annual maintenance alone has been reported to be €10 million a year for a lifespan that should take them to the middle of this century (click here).

As to their worth to a Navy that otherwise claims to be ‘running out of boats’, this is rarely discussed. Two years ago, Tridente got a bit of a splash in a UK tabloid for getting caught in a fishing net off Lizard Point in Cornwall.

Nobody was injured in the mix-up, said the Daily Mail, “but it did take sailors two hours to untangle the net”.