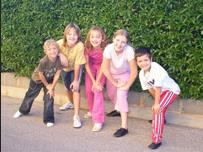 THE ALGARVEAN’S Experimental Theatre group is pleased to announce that rehearsals for the 2007 pantomime spectacular Scheherazade’s Greatest Hits are now under way.

For the past 15 years The Algarvean’s have been presenting quality entertainment in various theatres in the Algarve. Last year they were honoured by being the first English speaking theatre group to perform at the newly opened Auditorium in Lagoa where this year’s extravaganza will also take place.

The group is very excited about this year’s pantomime, as Scheherazade’s Greatest Hits is brand new and written by one of its very own members, Siân Hughes Roberts.

Siân, a well-known figure in the Algarve, has been performing in The Algarvean’s pantomimes since their first production, Puss in Boots.

With a wicked sense of humour she has combined typical panto characters with baddies and goodies, prince and princess alongside a wizard, sultan and many others, not forgetting some surprising animals and a captivating chorus of children, all currently preparing to entertain its audiences.

With Arabian nights as the main theme, audiences can look forward to a little more of the exotic as Scheherazade unfolds her tales in order to captivate the Sultan and keep her head.

The Algarvean’s are also delighted to welcome on board a new director to its ever-growing membership. Keith Beasley and his artist partner Liz Allen arrived in Portugal in 2005, and have settled in the mountains near Monchique. Although new to The Algarvean’s, Keith has been involved in theatre since his college days. He has performed most pantomime roles and duties over the years so brings a breadth of experience and ideas with him.

Scheherazade’s Greatest Hits will take place at the Lagoa Auditorium from Thursday, February 1 until Sunday, February 4, 2007 and full booking details will be announced shortly.