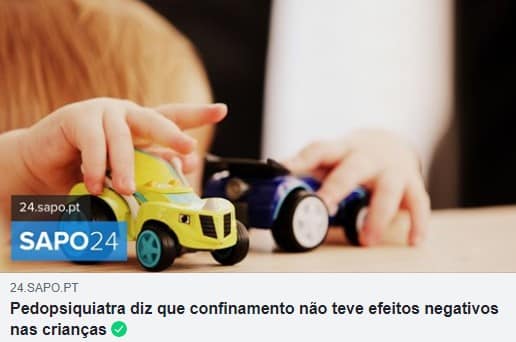 Child psychiatrist Pedro Caldeira da Silva has defended the urgent need to “find a way of freeing children” from the damaging psychology perpetuated through the pandemic.

“We’re not saying that (Covid) is going to disappear, that it doesn’t exist. We have to deal with this (illness) and we have to adapt, and live well, and see the good things in life even though Covid is out there”, he said.

But to continue with the situation for children as it is today, is “completely disproportionate”.

Changes have to be made to leave children alone “in peace in schools” – not to see them consumed by “all the fears” and “all the fuss about contagions”.

Director of Child Psychiatry at CHULC (the central Lisbon hospital authority) and head of the Early Childhood Unit in the capital’s Dona Estefânia children’s hospital, Caldeira da Silva explained he has no doubt that the “atmosphere of fear” instilled since the outset of the pandemic has caused anxiety and depression.

People have been living “in constant stress” which “contributes to an increase in emotional disturbances”.

Parents just as much as children have been affected. As he explains, it’s time now “to learn to live with adversity” as opposed to continue trying to outwit it.

And in this regard, the media should be leading the way –  giving a perspective that Covid “ is not a terrible threat that will never end and will always be hanging over us but that it is a fact of life”, something we have to cope with, just as we cope with “car accidents and illnesses like the flu, cancer or malaria.”

Families too have a role to play, he stressed. They need to “present and filter this reality”, to ensure children see hope.

When things become incomprehensible for adults, children have a lot of difficulties coping, he said, adding that in some ways the fact that the pandemic hit when the world had ‘social media’ to keep it connected was a positive aspect. The problem was that social media excluded the youngest children – those aged from three to six years old particularly, who were ready to socialise, and enjoying it, but not able to communicate online.

As to concerns that these last two years have set children back immeasurably, he was bullish. “It’s an exaggeration”, he said – pointing out that this line of thinking suggests  “families are incompetent, and that only school can give adequate stimulation, which is something I don’t believe”.

What was refreshing about this interview is that it has been given airtime at all. Bit by bit, and from experts as much as lay people, the message that children should be delivered from the misery of fear over an illness that they almost never contract is starting to trickle through.

On the wider sphere, we are being told ‘the peak of this latest wave of infections has peaked/ will peak this week’, and that Omicron in the end is ‘basically just a bad cold’.