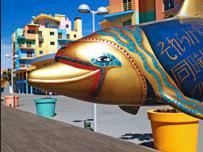 ALBUFEIRA IS one of the top places to live in Portugal if you are looking for quality of life, according to two studies this year.

The first study was published by the weekly newspaper Expresso in January and said that Albufeira was ranked second in the country after Lisbon, in respect of the Indice Concelhio de Qualidade de Vida (IQV), the Portuguese barometer to measure the quality of life in a council area.

The measure was created by the Economic and Social Development Observatory from Beira Interior University in the north of Portugal.

Albufeira’s ranking has now been backed by a new study from Instituto de Tecnologia Comportamental (INTEC), a private organisation that analyses behaviour in business and society. The INTEC study, published by weekly newspaper Sol and presented on Monday by Albufeira Câmara, showed that the council leads in areas such as diversity, tolerance and security as well as tourism.

Other factors taken into consideration concluded that Albufeira ranks in second place in economy and employment, in third on the accessibility and transportation, in fourth place in teaching and training criteria and in fifth position where the environment is concerned.

The culture on offer in Albufeira was also analysed by INTEC and the study concluded that the council has one of the most prosperous and diverse agendas in terms of programming and facilities.

Despite being subjective, the happiness of the people living and working in Albufeira was also analysed by experts of INTEC and that resulted in another second place, also after Lisbon.

The earlier study by Beira Interior University included 20 councils identified across the country as the ones showing better conditions for its residents. This included seven councils in each of the Lisbon and Algarve areas. The group of seven Algarve areas were Albufeira (2), Lagos (6), Lagoa (8), Loulé (11), Portimão (12), Faro (14) and Vila Real de Santo António (17).

The University’s study was based on 2004’s year book of the Instituto Nacional de Estatísticas (INE), the national statistics institute, and included factors such as quantitative criteria from Gross Internal Product (GIP), consumption and the cultural offering of the areas studied.