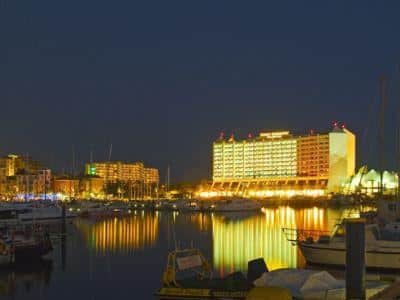 An Irish tourist suffered a terrifying ordeal during a violent attempted mugging in Vilamoura two weeks ago.

Sandra Byrne, 30, from Dublin, and a friend had just left a nightclub when they were approached by the gang of four men, aged around 18, who attempted to take Sandra’s bag from her.

She told Irish newspaper the Evening Herald that her first instinct was to hold onto her bag as they attempted to snatch it but she was then knocked to the ground and dragged along the pavement.

Her friend, who was across the road, ran over to help Sandra but she was then punched in the face as she tried to help.

The ordeal ended when a man, who had realised what was taking place, came to their rescue. The gang fled empty-handed.

Sandra Byrne was left with serious bruising, a sprained ankle and suffering from shock.

She was supposed to be staying in Vilamoura for two more weeks but decided to cut her holiday short as she wanted to be at home with her friends and family.

Aer Lingus allowed her to change her flight and she arrived home a few days later.

Sandra Byrne said she has been visiting Portugal since she was five and had not experienced or seen any crime before.

However, she said she has not been put off visiting the Algarve as she wasn’t staying in the area where she would normally go to.