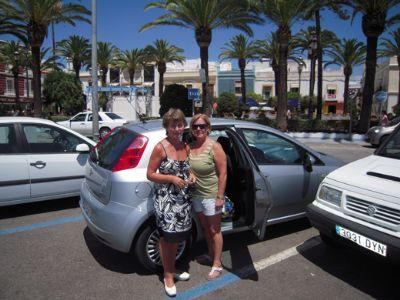 Two Irish tourists had their hand luggage stolen from the back seat of their rental car at Faro airport on Saturday by a man they thought was helping them.

Dolores Sturley from Clontarf, Dublin, and Audrey Kilbride from Foxrock, Dublin, had planned a peaceful week in the sun but only got as far as the airport car park when disaster struck.

“We had placed our luggage in the boot and our hand luggage on the back seat of the rental car and were just about to set off on our journey to Isla Canela, Spain, when a smartly dressed young Portuguese-looking man approached the car, saying there was a cat under the car’s bonnet. Of course we believed him and got out of the car,” said Audrey Kilbride.

Not wanting to kill a cat by starting the engine, both Audrey and Dolores started to look under the car in search of the animal.

When they got to their feet, they noticed that the back door of the car was open and both pieces of hand luggage were gone, as was the man.

“It happened so fast that we looked around and he was gone. Then we saw a silver people carrier pick someone up and speed away,” said a shocked Dolores Sturley.

They both ran back to the rental hire offices and told staff what had happened.

The police were called and they took Audrey in one of the patrol cars and searched the surrounding area while Dolores filed the report in Faro airport police station.

Audrey was lucky as she had removed her handbag from her hand luggage to get a drink of water before the conman struck, but Dolores lost between 300-400 euros in cash, jewellery, a mobile phone, credit cards, her passport and driving licence.

“Flying with Ryanair, you tend to put quite a lot of things in your hand luggage and with the security checks, I had put jewellery and a good belt in the bag, so you can walk through easily. Now it’s all gone,” said Dolores.

The Irish Embassy in Lisbon arranged an emergency passport for her after cancelling her credit cards, and also got a locksmith in Ireland to change her locks at her Dublin home.

Audrey, who owns a property on Isla Canela, was lucky enough to have friends in Spain who had a spare set of keys to her Spanish apartment.

“You carry so much in your hand luggage now that you don’t realise until it is gone.

“I would recommend that everyone makes a copy of their passport, driving licence and credit card numbers so in the event that this happens you can get on the phone quick,” she said.

A spokesman from the PSP police at Faro airport told the Algarve Resident: “This type of crime is not especially common at Faro airport. It could happen anywhere in the world.

The spokesman added: “There is an increase in crime at the busiest times of year, such as in summer, and we warn people to be vigilant. Many tourists arrive distracted and forget things in the airport every day, which they often report as stolen. They are also a little too trusting of strangers here.”

At the time the Algarve Resident went to press on Wednesday afternoon, no one from Faro airport was available for comment.