Portugal Resident
Home Portugal News Irate MP on the wrong side of Madeiran justice strips off in... 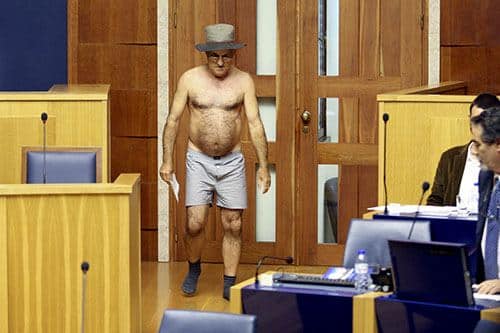 He is already known for his less than conformist attitudes. José Manuel Coelho has attended parliamentary sessions with a kitchen clock round his neck (in protest to a moratorium on speeches), he has donned a prison outfit (in protest to an 18-month suspended sentence received for defamation of the then Madeiran president Alberto João Jardim and his deputy), and he has unfurled a Nazi flag (in protest to the policies of his island home’s PSD party). But today was the first time he stripped off to his altogether’s in front of fellow MPs who very possibly saw the whole thing coming.

The fact that Coelho was so casually dressed almost gave the game away: his shirt was opened by an unusual number of buttons before he began his impassioned speech, and there was no tie to wrestle with.

The reason for the unexpected performance stems from the fact that Coelho has had a lien put on his salary as a result of a defamation action taken out by a local solicitor.

Coelho claims the solicitor is a ‘burlona’ (a con artist) who has robbed as many as 3,000 islanders. She has understandably objected to these very public claims, and the end result has been a condemnation for damages of €106,000.

The surprisingly hushed parliament was quickly evacuated as Coelho remained “for a time”, explains Público, eventually leaving wearing his hat and some hastily reapplied boxer shorts.

What comes of this latest protest remains to be seen. Certainly the PTP (Portuguese workers’ party) MP means to show parliamentary fellows that no amount of censure will get him to toe the line.

Coelho had only just been allowed back to parliament after having his mandate “temporarily suspended” following an incident involving a megaphone.