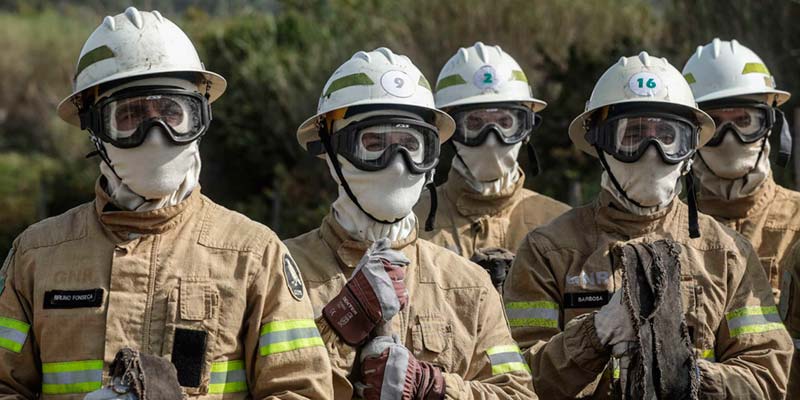 The report “points to failings in the actions of the pilot in charge of the helicopter” that literally dropped the men into a danger zone and left.

Three are still recovering from their injuries, their families demanding justice. Two remain in hospital: one still in a coma, the other having had both hands amputated.

The mother of André Ferreira, the only one of the three worst injured to have made it home, took to social media after the horror to say “there are no words for what happened. We must not keep quiet about it as it mustn’t be allowed to happen to other people’s children”.

This week Célia Bernardo has posted the results of the official inquiry, commenting: “First phase won. Now for justice. The families of the three GNR GIPS are united in this struggle, we will go to the final instances…”

And what these may be depends very much now on what happens next.

As was explained last year, Heliportugal – the owners of the helicopter – initially “guaranteed” that their pilot’s actions had been correct.

Company president Pedro Silveira stressed his flyer’s “long and distinguished career” and claimed he “alerted the agents to the advance of the fire but that these decided to continue their combat” nonetheless.

This has since been refuted.

Explains TSF online today, “the document concluded that the men in service of Heliportugal, contracted by the State, did not alert the agents to the danger, bearing in mind the change in the wind and in the direction of the fire”.

The inquiry ordered by interior minister Eduardo Cabrita concluded that the helicopter pilot was indeed responsible for the loading and unloading of the agents concerned and “did nothing to ensure the team was safe when the situation on the ground changed”.

All five suffered injuries, but three were particularly badly burnt and ‘recovery’ will never mean the return to normality.

The matter now is being passed to Public Prosecutors who will determine whether there is a case for criminal responsibility, explains TSF.

The report has also recommended that in future the GNR “reformulate its GIPS teams, so that the most recently trained men can be accompanied on helicopters by more experienced colleagues”.