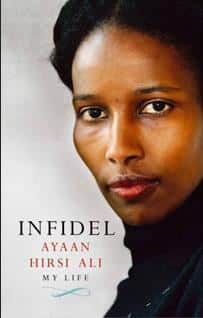 Infidel – My Life by Ayaan Hirsi Ali is out in paperback at 12 euros.

Ayaan Hirsi Ali is one of today’s most admired and controversial political figures.

She burst into the international headlines following the murder of Theo van Gogh by an Islamist who threatened that she would be next.

This profoundly affecting memoir shows the coming of age of an elegant, distinguished and sometimes reviled political figure and champion of free speech.

Raised in a strict Muslim family and extended clan in Somalia, Hirsi Ali survived civil war, female circumcision, brutal beatings, an adolescence as a devout believer, the rise of the Muslim Brotherhood and life in four countries under dictatorships.

She escaped from a forced marriage and sought asylum in the Netherlands, where she fought for the rights of Muslim women and the reform of Islam, earning her the enmity of reactionary Islamists and politicians. Although under constant threat, she refuses to be silent.