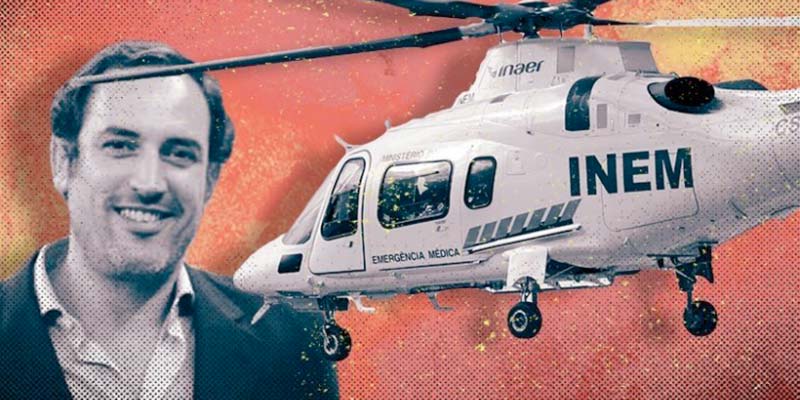 A flurry of news stories have begun doing the rounds trashing the reputation of a doctor who appears to have been refused life-saving helicopter transport for critically-ill patients.

Apparent conversations between Dr António Peças and medical personnel calling INEM have been uploaded onto Youtube.

They clearly demonstrate reluctance on the part of a voice presented as Peças to swing into action.

In one instance, the life of a 37-year-old women with an aneurysm and in the care of Faro Hospital hung in the balance.

The Youtube recording features the voice of a female doctor in Lisbon “trying to convince” Peças to transport the seriously ill woman from Faro to the Hospital de Santa Cruz in Carnaxide.

“I think we should give her a chance”, Sylvia Dissimoz tells Peças, who “ended up accepting the service and flew to Faro, but not in time…” writes Observador.

The woman died after her aneurysm burst. And Sylvia Dissimoz presented a complaint – not because the patient had died as this had always been a possibility, explains the online news service – but because “of the way the situation had been handled” by Peças, which left Dissimoz feeling “very uncomfortable”.

That story, says Observador, is simply one of “dozens of examples” where Peças was apparently working ‘double shifts’ “which are impossible to perform”, in the service of both INEM and Évora Hospital – receiving pay for both.

One of the recordings sees him saying that “going by road will be much faster” than using a helicopter, while others show how “apparently simple but urgent things transform in to long discussions and changes of plans… while patients wait”.

Peças’ suspension was for an indeterminate period during which various road deaths were registered in the absence of any VMER doctor being available.

Said local reports, Évora Hospital was finally ordered to pay Peças an indemnity of €44,000 and “reintegrate him into the service”.

Since this latest controversy blew up in the press, the Public Ministry has confirmed that it has opened an inquiry into complaints about Peças and his apparent “double shifts”.

Fow now, says Observador, Peças has not been made an ‘arguido’ (official suspect).

An internal report by INEM about an allegation that Peças refused to transport an elderly man with head trauma because he was himself ‘ill’ is also being considered by the Disciplinary Council of the Doctors Association.

Peças’ illness appears not to have stopped him attending a bullfight.

The ‘bullfight’ story may be difficult to refute as a photograph in Correio da Manhã appears to show the doctor “between the barriers”, watching the action in the arena intently.

His account rests on the fact that he was there solely to deliver a document.

In interview with CMTV, Peças has told the news station that he is the “victim of a persecution by INEM”.