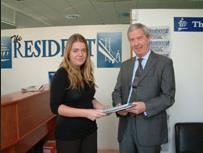 THE DEADLINE for submissions for The Resident’s Charity of the Year has passed.

Three judges, a lawyer, a Resident reader and British Consul, Bill Henderson, will now sift through those received and decide which should be The Resident’s Charity of the Year 2007.