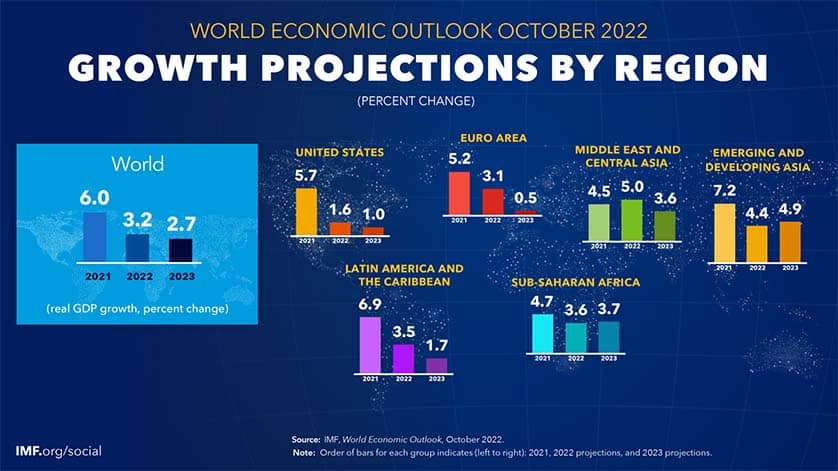 Less than 24-hours since PS Socialists presented the 2023 State Budget, based on calculations for growth and inflation that few believe, the International Monetary Fund has given its verdict.

As forecasts go, it is being seen as a case of ‘pouring cold water’ on Portugal’s overview. For example, even Medina’s projections for this year are revised downwards.

The IMF confirms that the Portuguese economy will continue to grow above the average for the eurozone “which will suffer a brutal slowdown” , stresses Expresso. “But Portugal’s growth dynamic will come in below the other 18 economies of the European Union”.

Says Expresso, the WEO is the principal document for macroeconomic forecasts, serving as the basis for IMF recommendations. It is presented in April and October every year (and partially updated in January and July).

“The document presented today is the most important” of the annual assembly that the IMF holds in October in conjunction with the World Bank, says the paper.

In total, the IMF ‘pessimism’ over Portugal “cuts 6% from the growth envisaged by Medina, and increases average inflation in relation to the base-scenario of the finance ministry by four decimal points”.

All this boils down to exactly what opposition parties have been baying: “Medina will have to face – if these projections materialise – an economy with very mediocre dynamics and higher inflation”.

The IMF’s forecasting comes at a point where President Marcelo is hearing opposition parties over their thoughts and concerns about the State Budget presented yesterday – and before the two-day debate scheduled in parliament for October 26-27. This debate is meant to be the moment that PS Socialists could be persuaded to take other views on board, to amend their final document which is scheduled for a final reading on November 25.