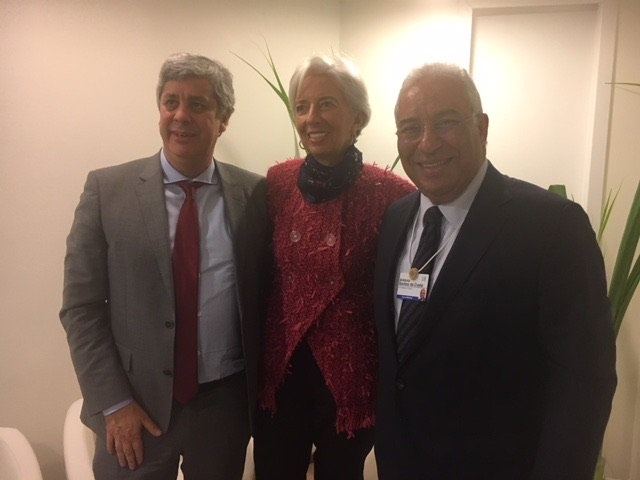 Already shining at the World Economic Forum in Davos, Switzerland, this week, Portugal got further praise from Christine Lagarde, director of the IMF.

Flanked by prime minister António Costa on one side, and finance minister aka new president of the Eurogroup Mário Centeno on the other, Ms Lagarde described Portugal’s economic recovery since the rigors of the bailout loan in 2011 as “impressive”.

“I am very satisfied following the meeting with the prime minister of Portugal and his minister of Finance”, she told reporters. “The IMF has a long and friendly tradition of relations with Portugal”.

Ms Lagarde then “referred” to the earlybird payment made by Portugal this week of a third tranche of its bailout loan in the form of €800 million.

Says Lusa, that leaves ‘only’ €4.5 billion to go – but this will now be at the reduced rate of 1% interest.

“Portugal is an excellent example of a country that committed to transforming its economy and is now reaping the benefits in the form of renewed growth, a fall in unemployment, and sustained market access”, beamed Ms Lagarde.

The praise has elicited a certain degree of sarcasm in opinion columns. As one wit has pointed out: “Yes, our health service is not to be recommended, our Civil Protection is in dire straits, our army barracks are raided and our schools serve diverse fauna (still living on the plates) to the young. But there is a “no” that redeems everything. With the government and its ‘boys’, austerity has been definitively buried…”

And in that regard, Christine Lagarde has “encouraged” Costa and Centeno to “continue this positive path for Portugal”.