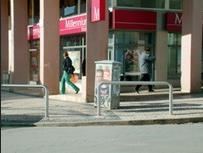 SHOP OWNERS in Lagoa were in for a nasty surprise last Sunday, when a 31-year-old Brazilian man went on the rampage, throwing stones at windows of shops and banks, causing thousands of euros in damage. He also vandalised park benches, a public phone booth and caused damage at a petrol station and at a local bakery.

The manager of the Galp petrol station in Lagoa has commented that it will cost around 4,000 euros to replace the glass window, which was shattered in three places after the attack. Staff at the petrol station knew the man as he had often frequented the forecourt’s café. They commented: “He never caused any trouble. He would drink his coffee, pay and leave to get on with his day.” One source informed the Correio da Manhã newspaper that the man does not have a job and is living in an old abandoned house on the outskirts of the city.

The Brazilian, who said nothing during the attacks, also threw stones at the windows of the Millennium BCP and Totta banks, both located in the main shopping area. Apparently, he didn’t want to hurt anyone or steal anything; his only objective was to hear the sound of the glass windows shattering.

Members of the general public who witnessed the incident raised the alarm and the GNR immediately sent a patrol car that was able to locate the assailant. After being arrested, his documents were found to be out of date, meaning that he was living in Portugal illegally.

The man is due to appear in court and is required to report to the Serviço de Estrangeiros e Fronteiras, the foreigners and frontiers office, on a weekly basis.