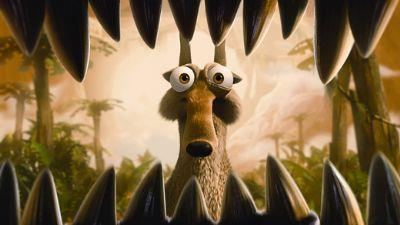 Following on from Ice Age 2 – The Meltdown, the herd’s lives are full of change. Since Manny and Ellie became a couple, they are now expecting a baby and Manny is anxious that everything has to be ready for when their baby is born.

This leads Sid longing for a family of his own, causing him to steal dinosaur eggs which result in him ending up in a strange underworld and needing to be rescued. Diego starts to ponder the thought of becoming laid-back as he is fed up with being treated like a house-cat.  And Scrat, the acorn-loving, unlucky sabre-toothed squirrel, discovers possible romance with the female sabre-toothed squirrel Scratte. The herd have to dodge danger in all directions as well as meeting up with a one eyed dinosaur hunter.