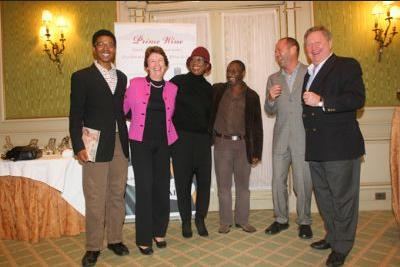 Bill Godley of Prime Wine said: “We started to import South African wines about 18 months ago, mostly to sell to our golfing clients who were visiting the Algarve from the UK and Ireland.

“The South African wine producers were quite sceptical at the time and had never tried to sell any of their wines in any of the wine producing countries – France, Italy, Spain and Portugal,” he said.

“Quite simply they had gone for softer markets such as northern Europe, Scandinavia and the UK.”

Buoyed by the company’s success in selling the wines to a number of leading Algarve restaurants and hotels, Prime Wine has now turned its sights on Lisbon.

As a result, Hannes Myburgh, the owner of the 1,000 acre Meerlust Estate, which produces some of South Africa’s best and most well known wines, was in Lisbon at the Lapa Palace Hotel at the end of last month to introduce his wines at a wine tasting for local sommeliers, publishers and buyers.

Prime Wine, which is also hoping to build up business across the whole of Iberia, is currently in advanced negotiations with Spanish department El Corte Inglés, which has 220 stores on the peninsula.