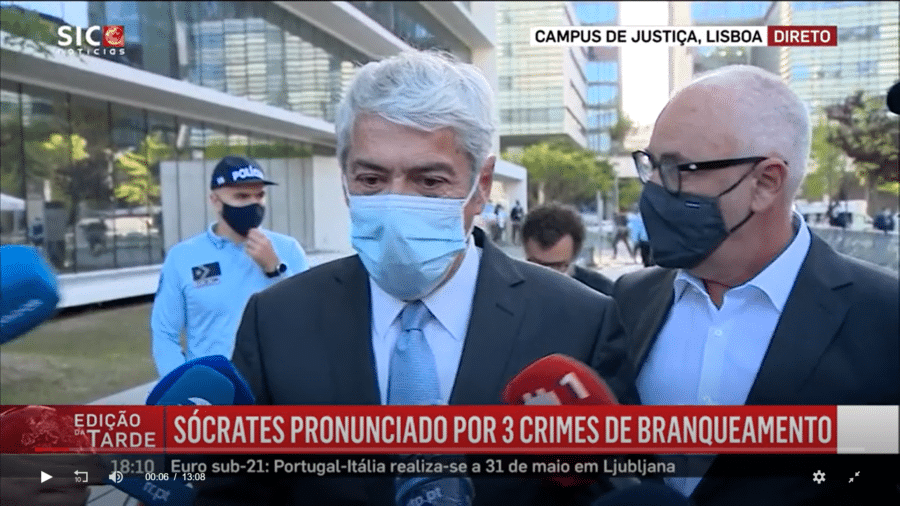 After one of the most extraordinary afternoons in the history of Portuguese justice, former prime minister José Sócrates has emerged from a Campus de Justiça courtroom, in which he witnessed a senior judge dismantle the corruption case against him, vowing ‘revenge’.

“I feel the tranquility of the innocent, and I want compensation for everything”, he said.

But Judge Ivo Rosa didn’t dismiss everything. He found there was evidence that Mr Sócrates had been ‘corrupted’ during his time as prime minister of Portugal, but that this crime has ‘lapsed’ (due to the length of time since it took place). Nonetheless three charges of money-laundering can still stand, as well as another three of document falsification.

And according to Mr Sócrates, even this is ‘a lie’ – and he means to defend himself against the charges. “I don’t know if on appeal, if in court, but I will defend myself…” he said.

The former PM already has a case underway in which he is gunning for €50,000 in compensation from the Portuguese State for the mismanagement of justice (click here).

The Public Ministry meantime, which has spent years on this ‘Operation Marquês investigation’ – involving 11 volumes (5,036 pages) of evidence, 14,084 segments of fact and 189 crimes allegedly committed by a myriad of players – has said it will be appealing.

This is, in truth, just another bend in a road which many people alive today will not live long enough to see to its end.

A leader writer last week pointed out that even if Marquês went forwards as the Public Ministry intended – and even if José Sócrates was found guilty – with all the appeals and challenges that could follow, he would be very unlikely to see the inside of a jail cell before he was 80.

The same applies to another Public Ministry ‘investigation’ – the case probing the collapse of BES. Ruined banker Ricardo Salgado (now in his 70s) would be unlikely to see an end to this before he is in his 90s, said the commentator.

In other words, today’s was just a high-point in a long-standing soap opera set to have a run similar to that of Agatha Christie’s Mousetrap*.

The extraordinary aspect of this case is that of a list of defendants ‘as long as your arm’, only 5, in Judge Rosa’s learned opinion, should be facing any charges at all. They are as follows:

189 crimes, 28 defendants, six-and-a-half years of constant media revelations – and now ‘a completely different case’, pared to the bone, has been deduced by a judge who summarised some aspects of the Public Ministry’s case as ‘fantasy and speculation’.

Instead of being prosecuted for receiving €34 million between 2006 and 2015 ‘in return for favouring business interests’, Mr Sócrates with Carlos Santos Silva faces charges of money-laundering a fraction of this amount: €1.7 million.

* Agatha Christie’s Mousetrap ran from 1952 till March 2020 when it was forced to close because of Covid-19.