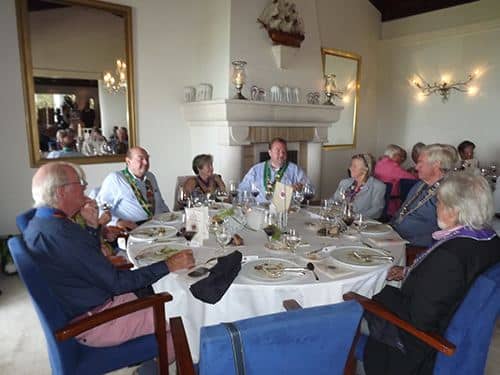 That was a Diamond Jubilee to remember, celebrated with great enthusiasm and true grit.

In the most inclement weather to which Britons have long been accustomed and which continues to mould our fighting spirit and love of the Monarchy – not least because the cream of the House of Windsor endured the elements with their people.

Looking back over the years reveals how much Queen Elizabeth II has adjusted to modern life and its demands.

George V ruled with solemn devotion and without scandal for 26 years. All this changed at his death in 1936, a memorable year for Britain and for me.

Edward VIII acceded to the throne with a good war record and an active concern for the underprivileged. A popular and democratic heir to the House of Windsor with an unfortunate predilection for a variety of older married women, he abdicated before his coronation after only 326 days as Sovereign, to marry twice divorced Wallis Simpson.

Simultaneously, Edward and I departed the lifestyle chosen for us, each under a black cloud of opprobrium. He went to Austria, I was put on a train labelled like a parcel destination Birmingham New Street, having been expelled from my Quaker boarding school for crimes committed against good order and discipline.

Burdened with a severe stutter and unprepared for the duties of a sovereign George VI’s reign lasted for only 16 years. He and his wife Elizabeth Bowes-Lyon saw us through World War II and the austerity that followed, remaining in London throughout the bombings and serving as a beacon of hope in those dark times.

And then his daughter Elizabeth, newly married and while still on honeymoon lost her Father and gained a Kingdom and, after 60 years, continues to devote her life to we who are her people. Long may she reign!

It was back to Earth with a bump here in the Algarve, the Boss having been clocked on the head by the boom while readying his Laser dinghy for a sail.

There was a lively breeze, blue sky and a friend for company on the lightly poppled waters of Lagos Bay. After several minutes afloat the horizon began to waver, his friend became twins and everything else in view had a double. This was not good news.

A visit to A&E Lagos was time wasted, no attention being given to the trauma to his head. After the best part of an hour with a drip in his arm the Boss was discharged.

Following a CAT Scan at a private hospital and MRI (Magnetic Resonance Imaging) taken in Faro A&E within two hours of our arrival there, we now know how things stand.

An indefinite period of no sailing or driving lies ahead but without doubt the old sea dog with salt water running through his veins will return to what he loves best: harnessing wind, wave and current as he has done for the past seventy five years.

Meanwhile he had been made an Honorary Member of Clube de Vela de Lagos for services to sailing and to the Club – there can be no greater honour or better therapy for a grounded marinheiro (sailor).

The serenity of life among the little hills of Monchique has unique healing properties and while we spend more time than usual sitting outside in the patio shade, we have been entertained by the family affairs of an assortment of birds that nest among the scruff and tangle of bush and trees reclaiming our plot of rustic land.

Beyond the boundary other birds struggle to rear their young, with golden orioles calling from first light. In the background the harsh cry of a partridge warns her chicks of approaching danger and quail heard, but rarely seen, pipe a constant “Kiss me quick, kiss me quick” in the long grass below the house.

Blackbirds and sparrows are on their second brood or working all hours to find something with which to feed those fledglings still at home.

Meanwhile, we have been scattering suitable seed around which must be like manna from Heaven for hungry youngsters cast out to fend for themselves. This morning while broadcasting handfuls along the drive there seemed to be more insect activity than usual. A closer looked revealed hundreds of ants, each of which carried a single seed in its oversized mandibles.

They were heading up hill to a hole in the ground close to the car port and having delivered the goods went back down again for more. Then I remembered our Portuguese neighbour’s words as he showed me how to broadcast seed from a sack held under one arm: “One for the birds, one for the ants and, if lucky, one to grow”.

That was 26 years ago when we first came out and were hoping to grow fodder for our horses in an unfamiliar climate, on inhospitable land. This smallholder prepared the soil, took us to Fruticoop where farmers bought supplies, told us what and how much we needed in the way of grain and irrigation systems, made us members for life and thereafter watched over us – all done in friendship and not for financial gain.

Neither that neighbour nor the one just across from our old farm remain in the valley, having moved to Odiáxere on account of ill-health or loss of a spouse. Old buildings are sold and renovated, nice people from different nations move in but their land lies neglected as an invitation to speculators.

Our old farm is blessed with an owner who cares passionately for her portion of Algarve countryside and looks to better times ahead.